Home Gay Stars When this gay athlete came out, everyone’s reaction was perfect

A childhood American Idol crush had him worried.

My earliest memory of feeling shame for who I was originated in sixth grade.

I was sitting on the couch watching American Idol with my mom, and I said, “Scotty McCreery is cute.”

“You’re not supposed to think that,” she said.

It shocked me that she said this. It made me think it was wrong to think another guy was cute. When a parent says something very shocking like this, it can stay with you forever. It makes you think that the rest of the world would respond the same way.

This sense of rejection followed me to middle school. One afternoon, I was sitting in a classroom with two female classmates and a teacher.

One of the girls kept saying, “I know you’re gay. Just come out already. Everyone knows you’re gay.”

I kept denying it no matter what she said. I sat there being bullied and no one did anything about it, not even the teacher who was about 10 feet away. I didn’t have anyone to talk to about the confusion and isolation that sometimes comes with being gay. Consequently, I heard the same message both explicitly and implicitly: being gay was something negative.

These messages tore me apart. Over time, they became my inner voice.

There was a time when life seemed unbearable to me. I was suffering in silence, with constant anxiety, depression and suicidal thoughts.

One day during my freshman year of high school, all of my emotions boiled over and I had just had enough. I was tired of hiding who I was; I wanted the pain and suffering to end. I went home just like any other day. That night, overwhelmed by my emotions while lying in bed, I began to cry. I cried and prayed to be like everyone else, wishing that I didn’t have to suffer any longer. I wanted to be the Erik that I used to be: always smiling and having fun with friends.

I had everything ready: the note, the outfit that I was going to wear, the goodbye text to all of my family and friends. I thought it was to be my last night alive. I cried and prayed for the suffering to end. Death was more inviting than life. No one at school knew what I was dealing with. Not even my family or friends.

I waited for hope, but hope didn`t come—that is, until the moment when I gained the strength and courage to answer my own cry for help.

After years of hiding, I wanted to stop running from myself.

I vividly remember waking up and walking into the bathroom. I stared at myself in the mirror as cold tears covered my face. I looked myself in the eyes and said it.

I had to start living a true, authentic life. After years of hiding, I wanted to stop running from myself. I had wasted time trying to be what I thought society wanted me to be.

The first person that I came out to was my former assistant principal. My heart raced. My hands shook. My body was numb. I kept thinking, “What the hell did I get myself into?” I started to tell him, but at first my mouth just hung open.

Finally, the words “I’m bisexual” came out, and there was no better response that I could have gotten.

“That’s awesome,” he said, smiling. This was the turning point. If I could tell one person, I could tell the world.

Months later I received an email from him:

“I still recall that day you came into my office, concerned, worried, and you told me that you were gay. I breathed a sigh of relief and told you that that was wonderful news and that I’d be honored to support you as you navigated your way to being out to the world. You did it all yourself and I am so proud of you. You are an amazing person and you deserve the love and support you are receiving in response to your post.”

Next, I told my sister. I drove to her school, sat down next to her on her couch and said, “There has always been something that I wanted to tell you.” She replied, “Okay.” After a few seconds of fidgeting with my thumbs I finally said, “I’m bisexual.” Her response was perfect, too.

“Okay, that’s fine. I still love you no matter what.” 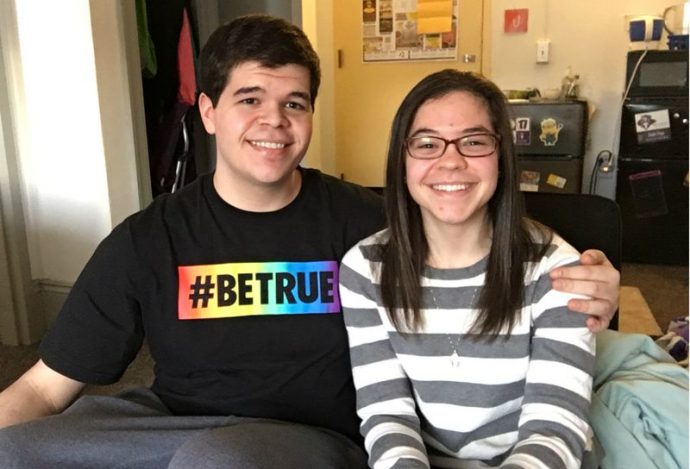 She got emotional and said that she didn’t want anyone to hurt me in anyway. I had to reassure her that everything was fine and that I had a lot of people who support me. After that, we snapped a few selfies together.

Last summer I knew I had to face he day that I thought would never come: the day that I came out to my mom and dad.

Despite what my mom had told me all those years ago, their reaction was perfect, too.

By the end of first quarter that school year, everybody in my life knew.

One day in gym class a friend said he saw my coming out post on Instagram. Then he put his hand out to shake my hand.

Everyone’s reactions have seemed to be just… perfect. I never would have guessed before I actually came out and gave them the chance to know the real me.

Accepting myself for who I am and coming out to my family and friends was by far the best decision that I have ever made. Through the process I’ve learned three things:

1) I am who I am and there is nothing wrong with that.

2) I was given this life because I am strong enough to live it.

So many people have taught me to embrace myself and to celebrate my true identity. If it wasn`t for them, I would not be where I am today. For that I am forever grateful for the people around me.

Erik Pocock is a senior at North Attleboro High School. He can be emailed at pocock.erik@gmail.com. You can also find him on Facebook, or on Instagram @ErikPocock. He is a member of the board of advisors for HeyUGLY, an international anti-bullying organization dedicated to empowering youth. You can find them on Facebook.