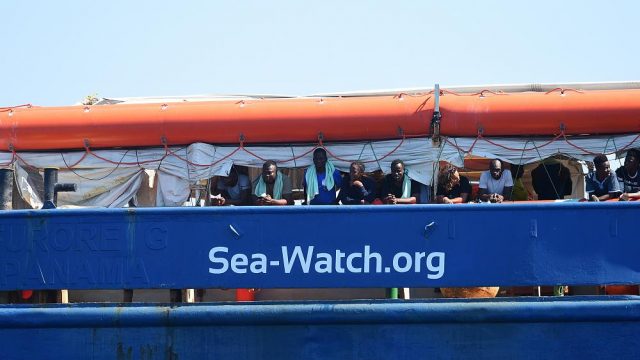 On Wednesday, the migrant rescue ship, “Sea-Watch 3” made the decision to enter Italian territorial waters near the island of Lampedusa, despite threats of severe fines from Italy’s Interior Minister Matteo Salvini.

It comes just one day after the European Court of Human Rights refused to issue ‘interim measures’ which would force Italy to allow the ship to dock in the country.

Those on board Sea-Watch 3 risk prosecution for aiding illegal immigration, as well as the seizure of the boat and a fine of 50,000 euros, according to a new decree of the Italian Minister of the Interior.

The ship’s captain Carola Rackete was shown in a Sea Watch tweet, saying the Italian coastguard and customs, who had approached the vessel, “were waiting for further instructions from their superiors”.

At 23:00 CET, Sea-Watch 3 was still positioned 2 to 3 nautical miles off the Lampedusa coast, reportedly avoiding any interference with the logistical operations of the nearby port.

But why did Sea-Watch 3 decide to defy orders and what is the situation like on board for dozens of migrants waiting to disembark?

‘The situation on board was no longer bearable’

Sea Watch has received widespread support from a number of charities and organisations, including offers for alternative ports. An autonomous group of port workers in Genoa have offered Sea-Watch 3 a destination to dock, but the NGO has told Euronews that Lampedusa was the “closest safe port”.

“We needed to enter territorial waters here in Lampedusa out of a state of necessity because the situation on board was no longer bearable,” said Tamino Böhm, a Head of Mission at Sea Watch in Lampedusa.

“A longer journey would have put people in more danger, people who have already been at sea for 14 days.”

After 11 migrants were permitted to disembark Sea-Watch 3 earlier this month for medical reasons, those remaining on the vessel have been left wondering if they need to be classified as ‘critically ill’ to be welcomed into Europe and onto safe land. Haidi Sadik, a Cultural Mediator on board Sea-Watch 3 told Euronews that conditions were becoming harder to predict.

‘They fell neglected and unwelcome in Europe’

“Our remaining 42 guests are trying to stay positive and keep the morale up, but it is undeniable that they fell neglected and unwelcome in Europe and that they are frustrated by the clear injustice of the situation they are in.”

“The excitement of seeing land is slowly turning into the same frustration of not having any clarity.”

Matteo Salvini has been vocal on social media in his opposition to Sea Watch vessels docking in Italy, accusing his German and Dutch counterparts of not taking responsibility for the ship. Sea-Watch 3 is a German vessel flying under the flag of the Netherlands.

Euronews has reached out to governments of Germany and the Netherlands for comment.

“Who will acknowledge the injustice that is happening?’

On Tuesday, the European Court of Human Rights had rejected Sea Watch’s appeal to allow the migrants to legally disembark in Italy, saying there were “no exceptionally serious and urgent reasons”. Tamino Böhm told Euronews this “politically motivated judgment” left them “very, very speechless”.

The charity maintains that there are still unaccompanied children aboard Sea-Watch 3, the youngest of which is believed to be 12 years old. Haidi Sadik says that Europe must take responsibility for the situation.

“If not the European Court of Human Rights, who will acknowledge the injustice that is happening to these 42 people right now, and what does that say about our values and our ability to uphold human rights in Europe as a continent?”

Sea Watch are continuing to update their social media profiles with news of the vessel’s progress and have warned that some fake accounts are purporting to represent the ship’s captain, Carola Rackete.