Home Gay Life Why do hotels put a book calling for the execution of LGBT... 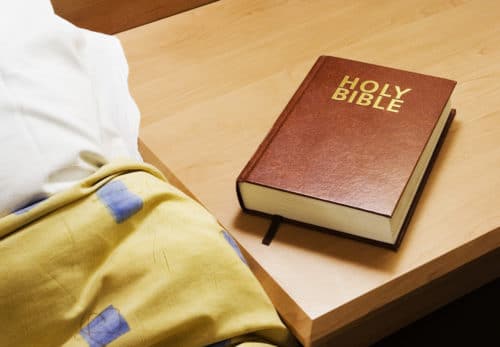 “Welcome to our hotel, how may I help you?,” the front desk clerk said as I stepped up from the quickly moving queue to register for my stay.

Those words greeted me in October when I went to Las Vegas for a conference. The hotel was a mix between over the top décor, a huge casino, a convention center and shopping mall. Looking around, the place didn’t scream homophobia. In fact, quite the opposite.

The mall that was part of the hotel was filled with the same stores that are on Rodeo Drive, Fifth Avenue or the Miracle Mile – hardly bastions of anti-gay hatred. The unbelievable displays of plants and flowers certainly had the influence of a couple of gay designers.

All of this is expected, but nothing had prepared me for what happened upstairs.

The room was your standard Las Vegas high-end casino hotel, with one exception. As I unpacked I noticed a book on the room’s desk. I was more than a bit surprised when I picked up the book and read the title. I never thought I’d have to prepare for a moment like this, but it was odd to hold a book entitled, How to Kill Gay, Lesbian, Bi and Trans Americans.

Swirling in my head all at once was a bundle of questions:

While it’s highly unlikely that the head of the most notorious anti-LGBT hate group would stay at a major Las Vegas casino, at that point I would not have been surprised.

The experience also raised the question of what to do:

Call the hotel manager and demand an explanation? Demand the housekeeping staff justify the book being in the room? Throw it away?

OK. I admit it, the story is not true. Well, most of it anyway.

There is, you see, a book on how to kill gay people in almost every hotel I have ever stayed in.

These quotes are directly from the Gideon Bibles place in hotels across the world. It’s important to note that these are not quotes from any translation of the Bible, but, rather, the actual Gideon Bible placed in hotel rooms worldwide.

Leviticus 20:13: If a man also lie with mankind, as he lieth with a woman, both of them have committed an abomination: they shall surely be put to death; their blood shall be upon them.

Romans 1:27: And likewise also the men, leaving the natural use of the woman, burned in their lust one toward another; men with men working that which is unseemly, and receiving in themselves that recompence of their error which was meet.

I Corinthians 6:9: Know ye not that the unrighteous shall not inherit the kingdom of God? Be not deceived: neither fornicators, nor idolaters, nor adulterers, nor effeminate, nor abusers of themselves with mankind.

I wonder if readers would feel the same way about a fictional book instead of a supposed instruction manual. If we are consistent, our answers to the questions on the Bible should be the same as answers for a book calling for the execution of gays if the only differences are the cover and the fact that it’s located in the nightstand.

I’ve decided to no longer sleep in a hotel room with a book calling for my execution. Like the non-existent book on How to Kill Gay, Lesbian, Bi and Trans Americans.

I am wondering what others think. Are you willing to stay in a place where the placement of a book calling for you to be killed is condoned by the hotel management? Since it’s virtually impossible to find a hotel room without one (even in the heart of Sin City), I now do what every self-respecting LGBT person should; I toss it in the garbage.

One far from the hotel room, lest it be noticed and – gasp – replaced.