Home Gay Life Why I’m coming out to my family and the world as a... 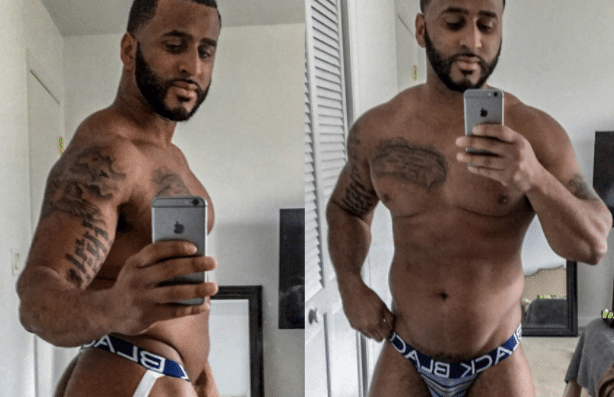 ‘These pics are a big f*** you to what family, friends or society say I should be. And an amen to who I was destined to be!’

Dave Tyson is a personal trainer based in Virginia, US. Besides working on his body, Tyson believes in sharing insights into his spiritual and mental journey. He’s building a following through his Instagram and YouTube.

An Instagram posting from earlier this week found him revealing more about himself. Namely that he prefers to take the submissive bottom role when it comes to sex.

The text he posted alongside a series of images explained why he was making the announcement. 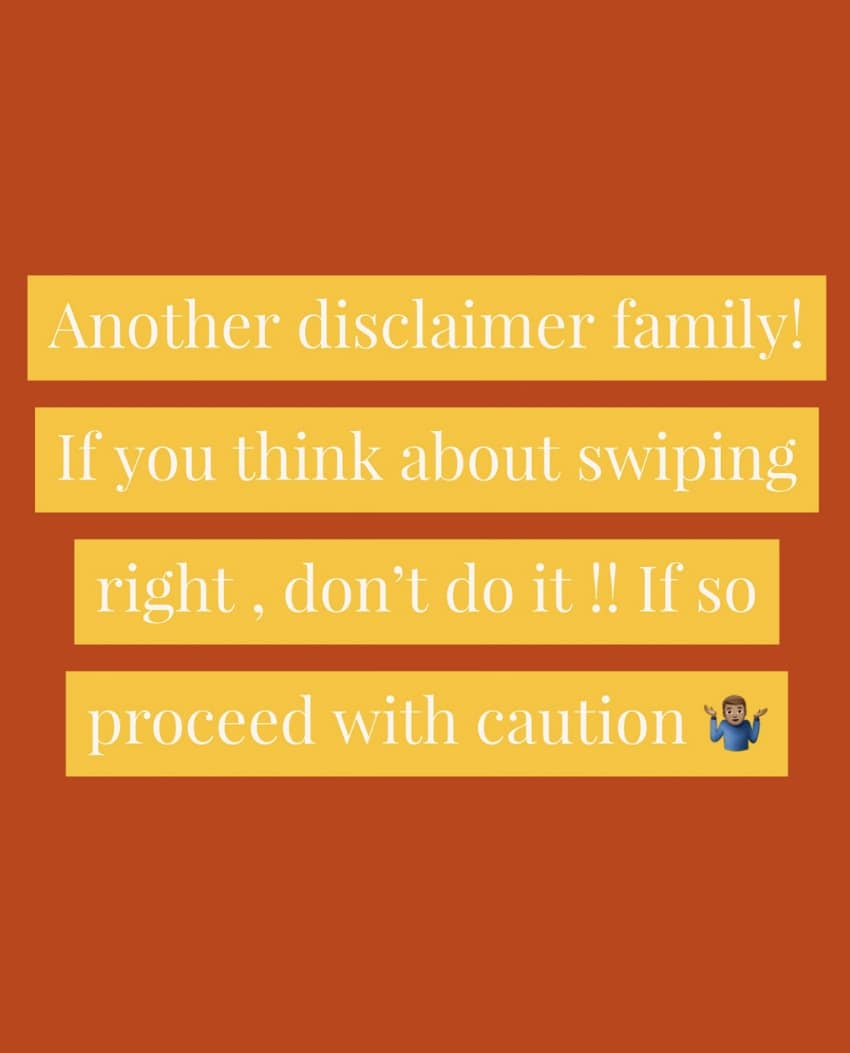 The first image in the series is a disclaimer warning family members not to swipe right, or to proceed with caution. The next two images are of Dave in a jockstrap. 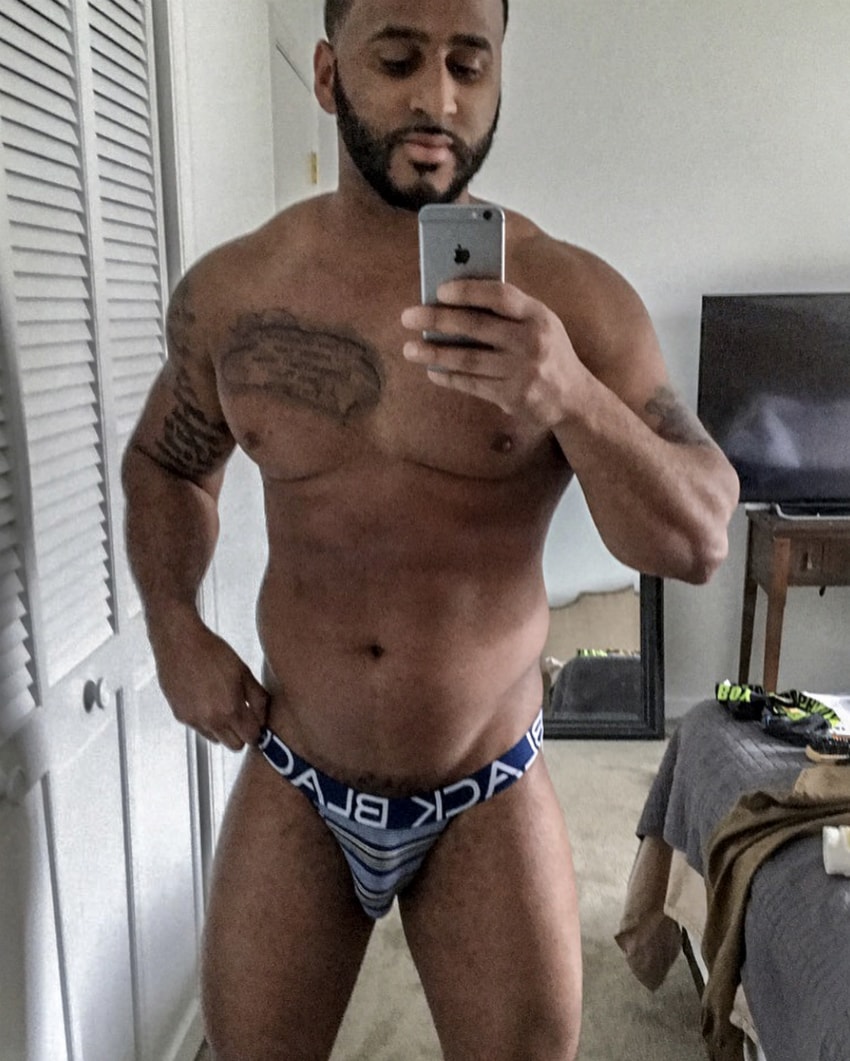 ‘Growing up as a black male I was taught that I’m not allowed to be affectionate cause that was gay,’ he said in the posting. ‘I wasn’t allowed to be loving cause that meant I was weak! Black men don’t ask other men for hugs! We are tough and don’t deal with feelings and emotions.

‘So I hid in a closet for years and did what I had to do to fit the mold to become the man society said a black man should be, but in the end who I really am came out! I’m gay and I love being gay but it didn’t stop there.

‘As a black gay man me trying to figure things out it was like I was giving a handbook on what a black gay man should be! He should be the aggressor, the top, dominant at that and I was conflicted and confused! 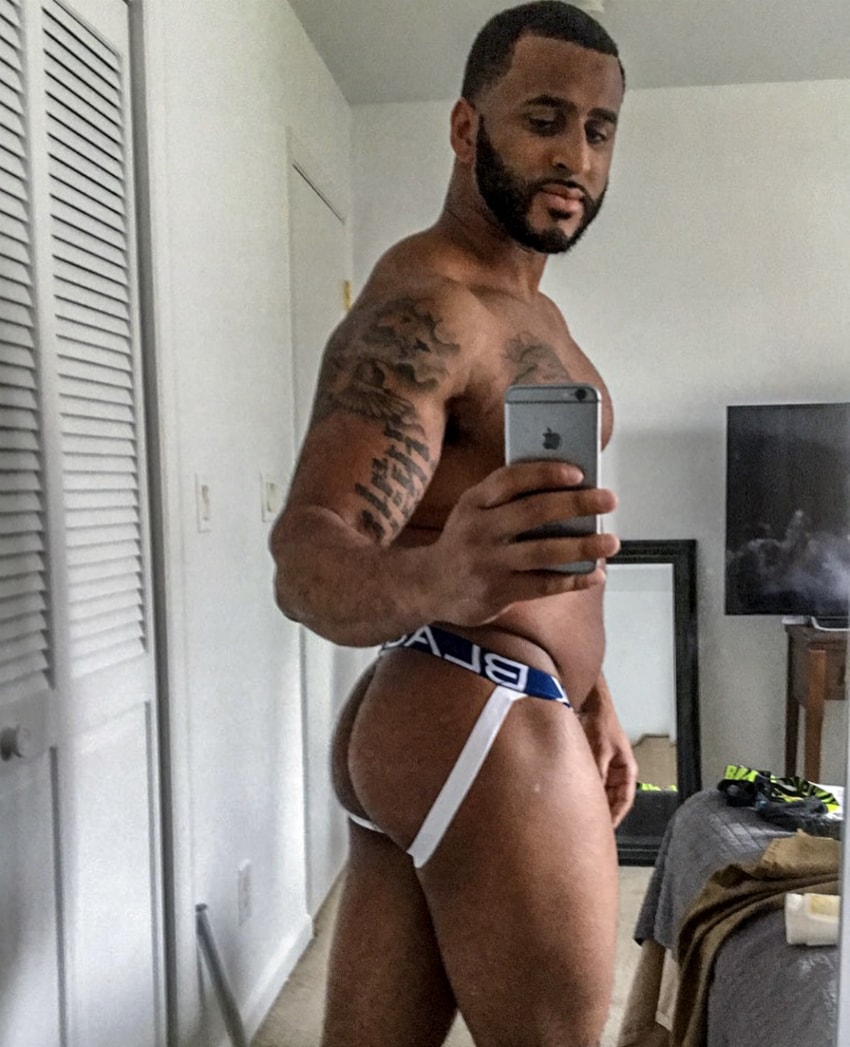 ‘Topping’s cool but it doesn’t do it for me’

‘Topping’s cool but it doesn’t do it for me. I’m a pretty dominant guy but with my guy I rather be the submissive one. After two years of confusion I finally realized this one truth. I wasn’t living being the man I was created to be I was living life who society said I should be!

‘Now some of you may say, “What the hell do these pics have to do with anything?” Well, these pics are a big fuck you to what family friends or society say I should be! And an amen to who I was destined to be!

‘To keep it in context I’ll just say I’m a proud black gay male! Yes I’m masculine, and muscular. Yes I can be aggressive, but with my partner I am a proud submissive bottom and I refuse to be ashamed of that any longer!

‘If you think cause I like a good pounding and being dominated makes me less of a man! My hustle and ambition says otherwise! If you think it makes me soft! Google me, yeah you can dot com me!

‘The message! Recreate yourself! Embrace who you are and not what others want or say you should be! Don’t miss living your best life trying to live life like someone else!’

Tyson expanded to GSN on his reasoning behind the posting.

‘What prompted me to make this post is the fact I got tired of being ashamed of being a muscular submissive bottom.

‘I love being a bottom but since I’m muscular and masculine a lot of people tell me I should be a top. I was ashamed of my family being ashamed of not only is the prominent child in the family gay, he’s the one that gets it up the ass!

‘The world and mostly African Americans have some leniency for gay males but for the ones who bottom it’s like the most detestable thing ever. It’s seen as feminine. I felt very ashamed and it made me confused about being a bottom or a top. Or if I was a bottom, would I have to sacrifice my masculinity?

‘Then one day I said, “Fuck that!” I adapted and created this mindset/quote: Once you accept the roles society places on you, you will forever be doomed and enslaved, unable to be who you were created to be.‘

‘I made that post because I know I’m not the only who felt like that … I’m a proud African American male who is also gay and a proud submissive bottom.’

Family turmoil when he was younger

Tyson says he’s had nothing but good feedback.

‘There’s been no negative feedback. It really shows sometimes it only takes one to stand for the rest to stand and I’m fine with stepping out in front of the battle to lead!’

Asked how he gets along with his family, he says they now accept his sexuality.

‘My family accepts the fact that I’m gay. I think it’s because they have grown and/or they see I no longer care if they accept it. It wasn’t always that easy. The emotional turmoil I went through as a kid almost led me to committing suicide and some loved ones tried to have me murdered for my sexuality! But I survived and am stronger than ever.’

Should more gay/bi men come out about their specific sexual preferences?