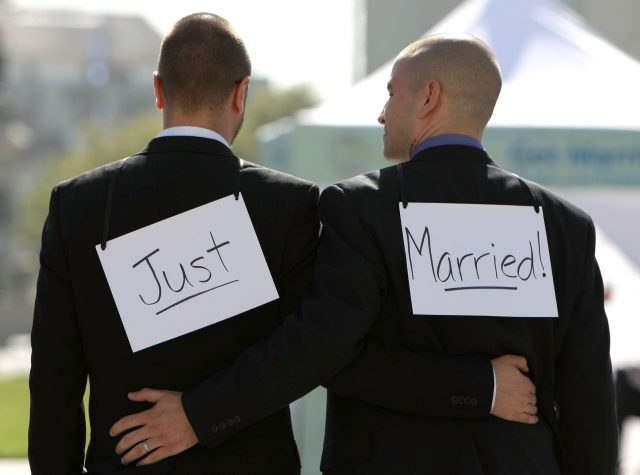 No one knows what the new presidency will hold when Trump and his advisors take over. Will it be a turning back of the clocks? Is it all just hot air? The questions right now outweigh the answers.

Zach Brooke is not waiting for many of those questions to be answered. He’s taking matters into his own hands and is making changes before the Trump administration takes over. He explains his actions in “Why I’m Marrying My Partner Before Trump Can Take My Rights Away.”

Zach opens his post telling how he met his partner in 2012, all thanks to a great suited Grindr profile picture. A hook up lead to something much more and they’ve been together ever since. They dealt with distance and unemployment as well as one relocating to another city.

Now, after years of teamwork, we both have jobs we like and the kind of life we’ve always wanted together. But the mood of the country and the track record of unbridled hostility espoused by many incoming leaders has us both afraid that this is as good as it’s ever going to get for us. When the Obergefell ruling dropped last year, they didn’t race to get a marriage license. Zach states they felt confident that this victory preserved our right to marry when the time was right.

We’re racing to the courthouse now. The morning after Donald Trump was named president-elect, my partner and I calmly discussed how his presidency might affect us personally. We concluded that the possibility of future same-sex marriage restrictions is very real, and that if we wanted to get married, the time is now or never.

It’s been a queasy, surreal week for the LGBTQ community since the election. On one hand, Trump has made overtures to sexual minorities that surpass any given by his party’s previous standard bearers. When the question of marriage equality was put to him shortly after his victory, he said the matter was “settled.” Before that, he’d used gay people as a prop in his hardline stance against Islamic terrorism following the massacre at Pulse nightclub in Orlando, and counted prominent openly gay men among his surrogates and supporters.

Beyond that, it seems like Donald Trump doesn’t give a shit about gay people—in a good way. There’s a big difference between acceptance and mere tolerance, but I’d rather have a tolerant president than one who’s fervently anti-gay. Trump has orbited in close proximity to queer folk for so long he doesn’t care anymore, if he ever did. When Caitlyn Jenner visited the Trump Tower, he told her she could use whichever bathroom she damn pleased. (Since then, he’s seemingly reversed that stance, proving that you can never take Donald Trump at face value.)

Yet the LGBTQ community does have reason to worry their relationships will again be under attack. Trump’s gay marriage proclamation following the election is at odds with the stances he campaigned on, including being “for traditional marriage,” that marriage equality should be left to the states, and that marriage equality opponents can trust him. The curated list of right-wingers he paraded around as a buttress to the conservative wing of the Supreme Court doesn’t inspire confidence, considering it includes judges who supported sodomy laws and politicians who compared same-sex marriages to people marrying bacon.

And while Trump himself might not care much about ruining the lives of queer folks, his transition team includes people like Ken Blackwell, a senior fellow at the Family Research Council who believes sexuality is a choice. Blackwell also once ran for office and insisted his (straight) opponent was secretly gay, and thus unfit to serve.

Then there’s Mike Pence, an anti-gay true believer if there ever was one. Even before he was put on the national ticket, Pence was already famous in gay circles as the architect of the Religious Freedom Restoration Act, which effectively legalized discrimination against LGBTQ people in Indiana. Pence’s playbook is being revived on a national scale in the form of the First Amendment Defense Act, which Trump has pledged to sign as soon as it lands on his desk.

Outside of the executive branch, other LGBTQ opponents or opportunists are lining up in opposition to existing law. The reinvigorated National Organization for Marriage released a post-election attack plan to unravel all measures of LGBTQ equality achieved since 2004, including a restriction on the definition of marriage. That’s to say nothing about the surge of invective directed at LGBTQ individuals following the election. Even supposed unifiers like Florida senator Marco Rubio have gone on record saying the future of gay marriage is subject solely to whims of incoming judicial appointees.

That’s not a future we’re willing to risk. My partner and I had spoken of marriage before, and considered ourselves to be in a serious, committed relationship—sort of like a low-key, long-term engagement. But we weren’t in any rush. Many of our straight friends dated for close to a decade before tying the knot, and while marriage was always the end goal, we both assumed it would happen sometime down the road, when we could afford to pay for a lavish wedding and honeymoon.

We no longer have the luxury to wait. Obama leaves office in three months—that’s barely enough time for a ceremony. We don’t know how dark the future will be for LGBTQ individuals in the four years to come, but we do know it will be harder to dissolve existing marriages than to prevent new ones, and we’d rather not take our chances.

So my partner and I are headed to court, before the haters do. It’s not the ceremony we wanted, but it is the legal status we need. At least we’ll have that, for now. – vice.com What do you think? Does a new presidency, one that will most likely be very different than the one of the last 4 year, does it make you want to shore up your life, finances, security for the future?

DO you think massive changes will actually occur or is it all hot air?