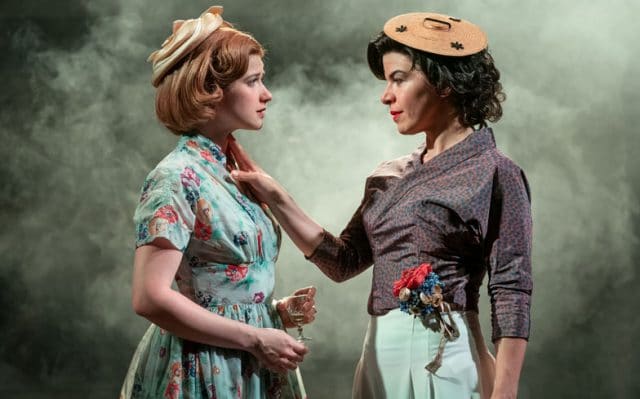 Wife opens with the famous final scene from A Doll’s House, which sees the independent-minded Nora walk away from the trappings and conventions of marriage, leaving her husband and children behind, in a bid to find meaning in her own existence. Those without an intimate knowledge of Ibsen’s masterpiece fear not – the characters discuss the play’s key moments and themes in a highly accessible manner.

It’s a hugely ambitious production. Set over a period of some 90 years, it affords the audience a series of snapshots into how opinions have changed over the course of several generations – not just towards marriage and women’s rights, but in the broader context of equality.

The opening scene focuses on a seemingly-conventional 1950s couple who have just seen a traditional rendition of the play. Over the subsequent two hours, we are also introduced to a gay couple who have been watching a foreign-language touring production in the 1980s; a present-day, modern, gender-fluid adaptation of the play, performed in the Kiln Theatre, is seen by a young straight couple; and the final scene is set in the future, but takes place in the same theatre dressing room as the opening act.

Wife is a complex play with a lot going on, but it holds together effectively with a strong through-narrative. At its heart, it explores the key theme of Ibsen’s work – the role of the ‘wife’ in a relationship, and the power dynamic between two people. Differing attitudes are presented over the course of several decades, taking into account social attitudes and conventions at the time. It was interesting to observe the young straight couple in 2019 struggling just as much to define their roles in their relationship as the gay couple with an age gap in 1988.

It’s also quite a challenging and thought-provoking piece of theatre. We particularly appreciated the commentary on equal marriage – which one character fought hard for and was thrilled to achieve, only to discover his life had become increasingly heteronormative. It posed questions about whether the fight for change had only made things become increasingly similar – as society adapts, it becomes increasingly homogenised.

All of this is articulated in a very clever way, with a sense of humour which is frequently hilarious – the text is peppered with a variety of deliciously devastating one-liners. The quality of the acting is superb throughout, featuring believable and nuanced performances from the six talented actors playing multiple roles. It all looks and sounds great, too.

We absolutely adored Wife – in truth we found it very difficult to fault. Sure, there were a tiny handful of minor hiccups  – a few narrative devices seemed rather convenient and improbable, while one or two moments were played for cheap laughs, jarring slightly with the otherwise smart script. But we’re perfectly willing to overlook these in the context of an ambitious, intelligent and genuinely very witty play. This is an outstanding and utterly essential new piece of LGBTQ+ theatre – not to be missed.