Home Gay Life Will Cambodia be the next Asian country to get same-sex marriage? 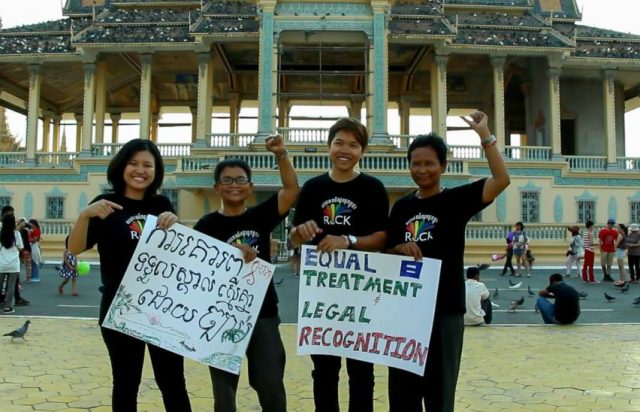 Hoping to ride the momentum of Taiwan’s historic ruling to legalize same-sex marriage, LGBTI activists and lawmakers in Cambodia are pushing the discussion in their own country.

Several opposition political parties said they would legalize same-sex marriage if they won next year’s election.

At a roundtable event about LGBTI issues, politicians from Cambodia National Rescue Party (CNRP), Funcinpec, the Khmer National United Party (KNUP), the League for Democracy Party (LDP) and the Grassroots Democracy Party (GDP) declared where their parties stood on the issue.

The largest non-ruling party the CNRP said it would run a referendum on the issue. Other parties said they would respect what the people wanted.

‘We cannot stop the feeling of love,’ said the KNUP’s Sou Suth Ratana.

‘Once the party wins the election, we will take it into consideration.’

According to the Phnom Penh Post the ruling Cambodian People’s Party (CPP) said it had no plans to make marriage equality equal, but confirmed the government would consider the issue if a formal request was made to do so.

According to Diplomat Magazine the former King Norodom Sihanouk and current King Norodom Sihamoni are in favour of it.
The revelations from the country’s leading political parties comes as 43 organizations released a joint statement. They called for changes to Cambodia’s laws.

‘Taiwan becomes a trailblazer in respect of LGBT rights in Asia, building momentum for marriage equality across the continent.

We take this historic opportunity to call upon the Cambodian government to show its commitment to LGBT rights by legislating for same-sex marriage in Cambodia,’ the statement read.

Homosexuality is not illegal in Cambodia and while there is no law preventing same-sex marriage, the Constitution refers to marriage as ‘a solemn contract between a man and a woman’.

‘There is now an unparalleled opportunity for Cambodia to join Taiwan in becoming a world leader in respect of LGBT rights, by legislating for marriage equal rights for LGBT Cambodians,’ the statement said.

The race to second place

LGBTI advocates across Asia are capitalizing on Taiwan’s success and pushing for marriage equality in their respective countries.
Thailand’s Justice Ministry confirmed yesterday it would try to pass LGBTI equal rights legislation as soon as possible.

It is hoped Taiwan’s ruling would influence the rest of Asia.