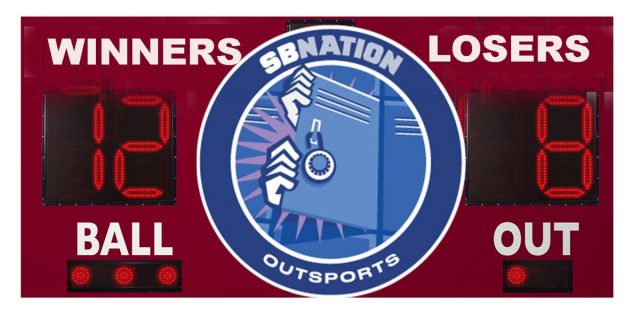 Each week, Outsports stops the clock for an instant reply of the week that was. It’s our way of memorializing the glorious victories, the ignominious defeats, and the players and personalities who made them, lived them or just couldn’t avoid them. This week, our list is Pride focused, as several members of the Outsports team are in New York City to celebrate World Pride. And we want to get right back to it, so it’s both short, and late!

We realize our roster may differ from yours, and we welcome your comments, contributions and critiques. We read them all! Details on how to reach us are below, after our look at the Pride Edition winners and losers.

Winners: The New York Yankees and everyone LGBTQ

On a special night celebrating the legacy of Pride this week, the New York Yankees dedicated a permanent addition to Yankee Stadium’s Monument Park, a tribute to the LGBTQ community. On it, a plaque reads: “In commemoration of the 50th anniversary of the events at New York City’s Stonewall Inn which sparked the modern LGBTQ movement, this plaque serves to honor the struggle for equality, and is a reminder of the richness we gain by nurturing inclusion and diversity. Acceptance forms the bedrock of our community, and let it be known that Yankee Stadium welcomes everyone as a gathering place for all.” Kudos also to the California Angels of Anaheim for holding their first Pride night this past week, with Billy Bean in attendance.

Losers: The only two MLB teams without a Pride night this season

The Texas Rangers and Houston Astros have honored their LGBTQ fans at least once in their past, but not last season, and so far, not this season. They’re the only 2 teams in Major League Baseball without some kind of game on their schedule connected to LGBTQ community.

Winners: The NHL players marching in their local pride parades

Losers: Those in charge of The Vatican women’s soccer team

Whoever makes decisions for The Vatican’s first women’s soccer team canceled their very first match after activists who oppose the Catholic Church’s teachings on abortion and LGBTQ rights displayed pro-Pride banners, and handed out informational leaflets. The messages didn’t just appear in the stands, but on the field as well: Opposing players also sent a message to the Vatican City team by wearing shirts advocating for reproductive rights. So The Vatican team’s leaders called it off before it began.

Anthony Bowens celebrated Pride by outlasting four other men and winning the championship as he continues “fighting for change.” His big win came in the main event of Battle Club Pro’s first outdoor event, Unfinished Business. Draped in a rainbow tank top adorned with the phrases “Team Pride” and “Love Wins”, the “Five-Tool Player” battled back from being thrown off a ten foot concrete pillar to the floor to capture the title. He certainly lived up to his one rule: prove them wrong.

Pride Month kicked off in northeast Ohio with a federal discrimination lawsuit filed on behalf of a former high school basketball player, alleging he endured discrimination and harassment from coaches and administrators at Fairless High School after he was outed as gay. That’s not a typo; the school and district really are named “Fairless.” In one instance, the coach is alleged to have told the player that he didn’t have to join team prayers because he knew the teen “hates Jesus.” In another case, the coach had the player feel his arm muscles, calling him weak. Fairless assistant principal Mike Hall allegedly told the student that “he chose to be bullied because he chose to be gay.” According to the filing, all of these events led the student to become depressed and unable to concentrate on his academic work. The lawsuit seeks unspecified damages to compensate for the teen’s “emotional distress and psychological damage.”

Winners: 16 Connecticut groups that came out in support of transgender student athletes

One week after the Alliance Defending Freedom filed a federal Title IX complaint on behalf of three Connecticut cisgender high school athletes who claim they were victims of discrimination, a group of Connecticut-based gender justice organizations responded with a statement of solidarity toward transgender student athletes. Led by the New Haven Pride Center and cosigned by 15 other state organizations, including the state’s branch of the American Civil Liberties Union. “Together, we reject unfounded fears about transgender athletes in our state and reject the suggestion that cisgender women and girls benefit from the exclusion of women and girls who happen to be transgender. Instead, we recognize that all women and girls are harmed when some are denied opportunities to participate in sports because of stereotypes and fear.”

During an episode of The Breakfast Club radio show in New York City, Andre Iguodala shared some eye-opening comments about his former Golden State Warriors coach Mark Jackson, including the claim that Jackson is blackballed by the NBA because he’s religious and doesn’t believe in gay marriage. But it was a comment by one of the hosts of the show, Charlamagne tha God, that earned him loser status this week. He decided to weigh in on why he wishes all gay people would just stay in the closet: “I kind of miss those days when everybody was lying to each other, meaning everybody was keeping their shit to themselves, whatever your religion was, what your politics were, what your sexuality was, it made the world a lot less complicated.” As Outsports cofounder Cyd Zeigler wrote, “It’s that attitude that contributes to the pressures for athletes to stay in the closet, this idea that they shouldn’t be sharing who they are publicly but they should keep it hidden inside them like a secret. It’s a deeply damaging mentality.” Not really a surprise coming from this transphobic crew.

Former Louisiana Tech running back and Montana State rugby player Brandon Davis will appear on the MTV dating show, “Are You The One?” which premiered June 26. Davis shared his coming out story with Outsports in 2016 and has continued to live his life authentically. “Are You The One?” casts a group of single men and women looking to find their “match” among the group. If the group can succeed in finding all perfect matches by the end of the season, the group wins $1 million.

Before current world number 8 Kevin Anderson made a return to the Association of Tennis Professionals (ATP) circuit he took a stand to advocate for a shift in the ATP player culture. He not only supports closeted LGBTQ athletes to come out but also acknowledges that ATP players have real problems off the court that need to be addressed before many may feel safe coming out. Anderson proposed a concrete change that could have a real effect on helping gay men in the ATP feel more comfortable being out: “The NBA actually has a system where people are fined for saying that. It can be very offensive and steps like that can be implemented in tennis. It’s part of being respectful and understanding how simple comments like that can be received by others,” Anderson said. The response from ATP and fellow players: silence.

In an interview with 8by8mag.com, soccer phenom Megan Rapinoe declared “I’m not going to the fucking White House,” if her team wins the Women’s World Cup. “No fuckin’ way will we be invited to the White House. [Trump] tries to avoid inviting a team that might decline. Or, like he did when the Warriors turned him down, he’ll claim they hadn’t been invited in the first place,” she said. Trump responded to Rapinoe via Twitter, seemingly inviting her team to the White House just to prove her wrong. In support of her teammate, out soccer player Ali Krieger tweeted a reference to the 15 women who have accused the president of unwanted sexual conduct. As far as the action on the pitch, Rapinoe on Friday scored her fifth goal of the World Cup thus far. It was also the one that put the United States into the semifinals, and eliminated host nation France. Rapinoe scored both of the U.S. goals, as the American women defeated France, 2-1.

FIFA, the world organization that governs international soccer matches, has fined the Brazilian Football Confederation $15,000 for anti-gay slurs chanted by fans during Brazil’s matches in the recent Copa America tournament. According to the Associated Press, the chants began during Brazil’s opening match against Bolivian in Morumbi stadium on June 14. The chants reportedly continued during Brazil’s quarterfinal against Paraguay at the Arena do Gremio in Porto Alegre. While the fine might sound sizable, it’s not really much money for massively profitable sports franchises.

Retired NBA legend Dwyane Wade has a long list of accolades, but his most recent one might be the most rewarding of all: supportive father. The three-time NBA champion discussed his duty to lift up his son, Zion, as he tells his story of identity during a sit down with Variety last week. “I think as a family, we should support each other. That’s our job. And my job as a father is to facilitate their lives and to support them and be behind them in whatever they want to do,” Wade said.

Winners: Our out LGBTQ athletes

Find out about gay Rams cheerleader and trailblazer Quinton Peron