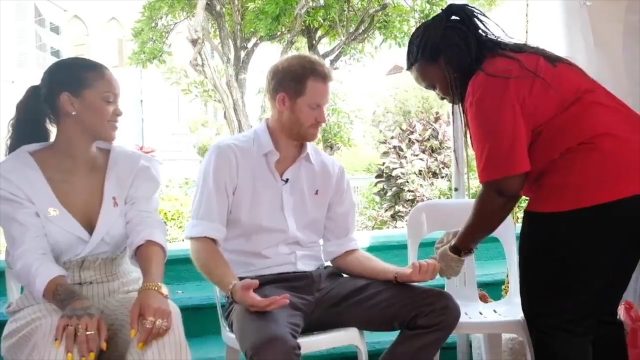 The pair met locals on the island of Barbados, following a celebration of the island’s 50th anniversary of independence.

Prince Harry joked that taking the test would be painful, squirming as the nurse went to prick his finger.

It was the second time that Harry had taken a test in public in five months in an attempt to reduce the stigma surrounding the virus.

The last time Prince Harry took the test there was an incredible five fold increase in people taking HIV tests. Prince Harry and Rihanna in Barbados.

Moments later, Rihanna proved that she was tougher than the prince, saying: “You made it seem like it hurts.
“It’s not as painful as you said this morning.”

Both Prince Harry and Rihanna tested negative when their results came back 20 minutes later.

The prince follows in the footsteps of his mother, who famously campaigned to end the stigma around people with HIV AIDS. Almost one-third of Britons think HIV can be caught by sharing a toothbrush with someone who is infected, a survey has suggested.

The Terrence Higgins Trust has said, “inaccurate myths from the 1980s are still deeply entrenched in society”.

Figures released by Public Health England suggest 101,200 people were living with HIV in the UK in 2015, but around one in eight have an undiagnosed infection.

There were 6,095 new diagnoses of the infection during the time frame, 43% of which were in London.

Men who have sex with men remain the largest group to contract HIV, accounting for 56.1% of all new infections.