Home Gay Life World landmarks lit up in rainbow colours in memory of the victims... 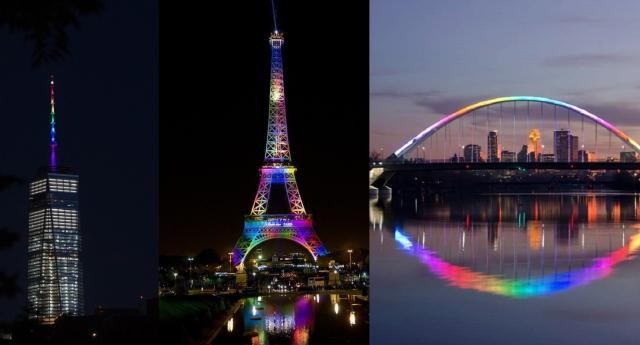 Terrorist hate crime attack that happened on 12th of June in the Pulse gay bar in Orlando, Florida, caused death of 50 people who were killed. 53 people were injured after this shocking attack, in which a gunman opened fire.

In memory of the victims in Orlando many landmarks around the world lit up in the rainbow colour of Pride flag.

Paris supported this campaign and The Eiffel Tower became one of the first landmarks that lit up in colours of the Pride flag. Paris, 130 citizens of which became victims of terror attacks in November, 2015, lit up gay flag colours in support and solidarity with the LGBT community.

The mayor of Paris Anne Hidalgo claimed that the Eiffel Tower would be lit up in the rainbow flag colours and Mayor Hidalgo posted in his twitter:

“Paris stands with Orlando. Tonight, The Eiffel Tower will be illuminated in the LGBT colours in honour of the victims #lovewins.”

Paris City hall also demonstrated its solidarity and is now draped in the rainbow flag colours.

The main aim of this campaign is to show “compassion, solidarity and love”.

By the way Paris became not only one city that made such a gesture of solidarity.

World Trade Center in New York that was built on the site of the terror attacks in September 11, also lit up rainbow colors.

The rainbow flag is also now flying over the Parliament in Scotland.

Nicola Sturgeon claimed: “Scotland stands in solidarity with the people of Orlando, and LGBTI communities across the world.”

Scotland stands in solidarity with the people of Orlando, and LGBTI communities across the world. pic.twitter.com/fVqeJnv5rz

Here is the video of Tel Aviv City Hall lit up bright colors of rainbow flag.

New Zealand and Australia also lit up their clock towers.

Here's our pink Sydney Town Hall as it gets darker #Orlando pic.twitter.com/7kKOueTQ0E

The US flag on The White House is flying at half mast. It is usually so for mass shootings and attacks.

The UK’s National Theatre commemorated the victims as well.

In light of today's events, nothing but love and respect for @NationalTheatre and these colours … pic.twitter.com/G8EQZSsuKV

Smaller cities and towns also followed this campaign and paid their respects to all the victims of this tragic shooting in Orlando.

Tragedy in Orlando, @MayorSlyJames reports that the Bond Bridge will remain lit up rainbow colored in #solidarity pic.twitter.com/MsHVg4ojEL

The Lowry Avenue bridge will be lit rainbow in memory of the Orlando shooting victims pic.twitter.com/5jJ3cQcor7