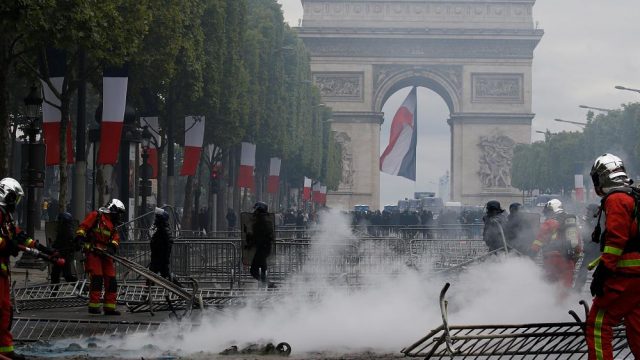 French president Macron, who traditionally “reviewed the troops” during the military parade on the Champs-Elysees earlier on Sunday, was welcomed with boos from Gilets Jaunes among the audience.

The protesters were not wearing the infamous yellow vest, but they chanted “Gilets Jaunes! Things are going to blow up!” and “Macron, we’re coming to get you!” as the president’s chariot passed by. Some had cardboard signs as well as yellow scarves or balloons.

A small group of protesters was reported by the AFP as walking up and down the avenue, singing “We are here, even if Macron disagrees, for the honour of workers and for a better world, we are here.”

Prominent Gilets Jaunes figures Maxime Nicolle, who relayed early calls to protest on social media when the Gilets Jaunes movements began last year, and Jerome Rodrigues, who lost an eye to police weapons during a protest earlier this year, were arrested and held in custody ahead of the Bastille Day celebrations for “illegal organisation of a protest”, the Paris prosecutor’s office said.

In total, 152 people were taken in for questioning ahead of or during the parade, the Paris prosecutor’s office confirmed to AFP.

Rodrigues’ lawyer Arié Alimi compared these arrests to that of “political opponents”. “Not so long ago, the French government said it was shocked that Russia would arrest political opponents during protests, but now it is what they are doing”, Alimi said in a live interview posted on Twitter. “We are extremely worried about this situation, which is getting worse.”

Clashes between police and protesters started at the end of the parade, with some protesters trying to set up barricades using crowd control barriers to block traffic, while the police responded with tear gas.

By mid-afternoon, the situation was tense on the Champs-Elysees. Videos of police visibly nervous were shared on social media.

The Paris fire department was called after protesters set fire to dustbins.

It is the first time since 16 March that Gilets Jaunes have protested on Paris’ Champs-Elysees. In March, protesters had burned down the luxury Parisian restaurant Fouquet’s, which just reopened this week.