Home Gay Life You might not have heard of Italy’s Stonewall moment but it’s so... 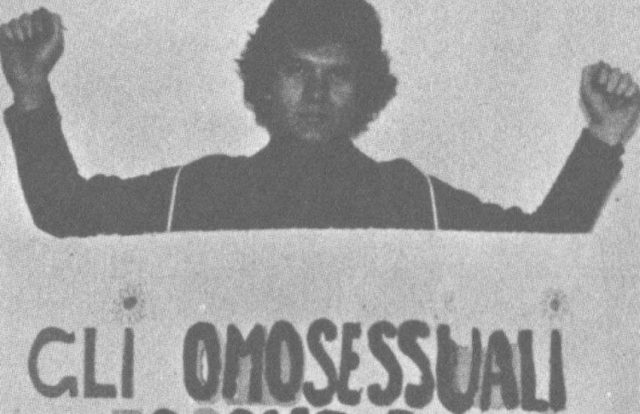 Every country has its Stonewall moment.

It is hardly surprising that those places where English is the majority language look, first, to Stonewall itself, in the United States, as a turning point in the struggle for LGBTI rights. But in Italy, they mark an altogether different date and location.

This was the very first Pride to take place in Italy.

On that day, demonstrators turned up to protest against the the International Sexology Congress.

The congress was organized by the Centro Italiano di Sessuologia (CIS, or Italian Centre for Sexology). The meeting at Sanremo’s Casinò Matutia was to discuss ‘deviant behaviors in human sexuality’, with particular reference to homosexuality. 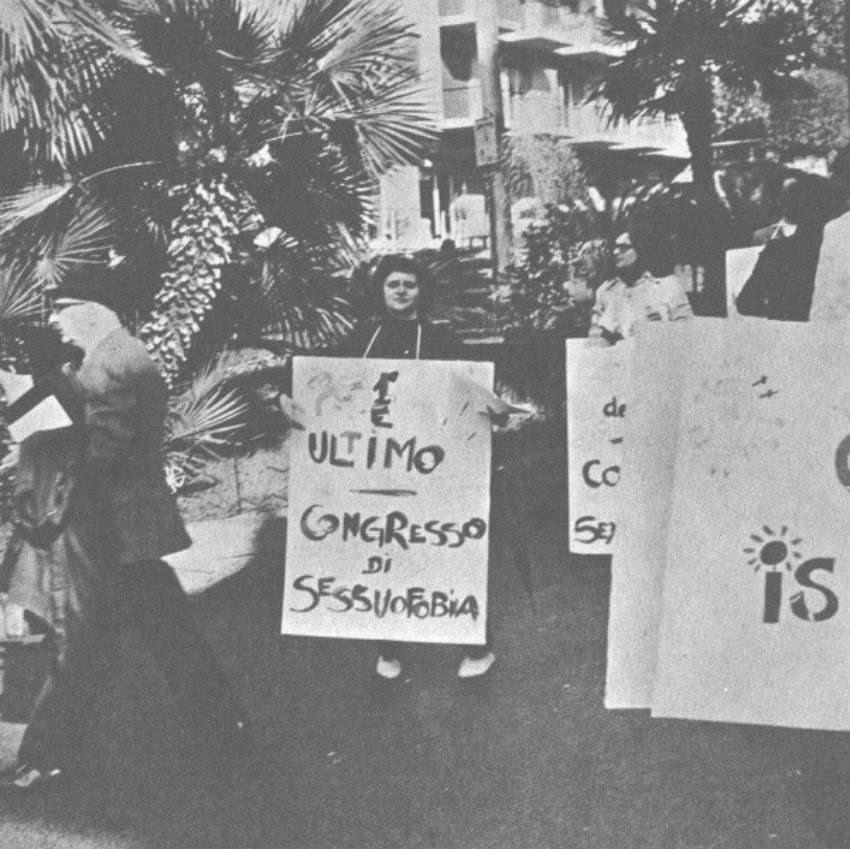 This was a brave move on the part of the few dozen individuals involved. In the years following the War, the official policy was ‘repressive tolerance’ (toleranza repressiva).

This was endorsed by the medical establishment who considered homosexuality as disturbed behavior or illness.

This was in contrast to what some may consider legal oddity: that same-sex sexual relationships in Italy had been decriminalized and placed on the same footing as opposite-sex relationships as long ago as 1890, with the publication of the Zanardelli code.

The climate was changing slowly throughout the 60s with some progressive attempts to decriminalize homosexuality.

But without significant support from the left-wing, which mostly viewed homosexuality as a ‘bourgeois vice’ throughout this period, they were doomed to failure. The 60s, too, saw panic around gay people turning young men gay. 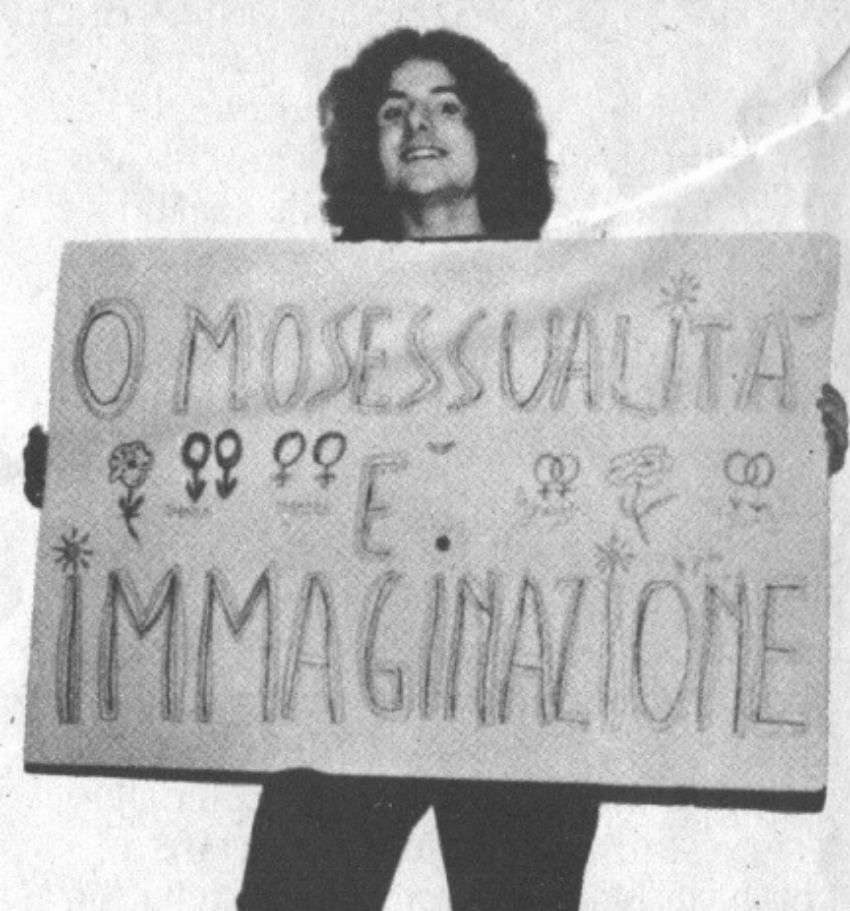 In 1960, there was scandal and panic over the balletti verdi episode. This was the discovery that gay parties were taking place in Castel Mella in Lombardia, and that young men of ‘minor status’ (aged between 18 and 21) were present. This was followed in 1964 by the case of Aldo Braibanti, a professor of philosophy, accused by parents of his younger partner of seeking to brainwash their son into becoming homosexual.

Giovanni, Braibanti’s 23-year-old lover, was sent to a clinic where he was forced to undergo electroshock aversion therapy for 15 months – before being returned home and required to live with his parents. In 1968, Braibanti received a sentence of nine years imprisonment (later reduced to four).

Nonetheless, the winds of change were gathering. The first sign of this was the publication in 1971 of Massimo Conaoli’s Manifesto per la Rivoluzione Morale: l’omosessualità Rivoluzionaria (Manifesto for Moral Revolution: revolutionary homosexuality).

The same year saw the emergence of Fuori! a radical Marxist group campaigning for gay rights. Fuori is both acronym, standing for Fronte Unitario Omosessuale Rivoluzionario Italiano (United Revolutionary Homosexual Front of Italy) and also play on the meaning of the word itself.

Fuori means ‘outside’ and ‘uscire fuori’ is to come out.

This, together with a publication of the same name, lasted until 1982, when fragmentation set in.

Italians have been protesting for same-sex relationship recognition for over a decade. This protest was from 2005.

The baton of LGBTI rights campaigning has since been taken up by ArciGay, which describes itself as ‘the main Italian LGBTI non-for-profit organization, the largest in terms of number of volunteers and activists throughout Italy’.

But that is not to dismiss the sterling work of many other groups, including a strong trans rights movement in Italy based in Bologna around MIT (Movimento Identità Trans), dedicated to defending and supporting the rights of trans people throughout Italy.

LGBTI rights, still nowhere near as advanced as in other EU countries, have come a long way since the dark days of the 1970s.

There have been a number of out LGBTI deputies in parliament, including Vladimir Lussuria, the first out trans member of any European Parliament.

Civil unions are recognized, but not same sex marriage: in fact, the Italian legal position is, to put it politely, a mess.

Over a range of issues, from marriage to adoption, Italian courts have found themselves well ahead of what the Italian parliament is prepared to legislate, establishing, over and over, that the Italian State is now, in several respects, in breach of fundamental Human Rights in respect of LGBTI issues.

The election of a radical right coalition, including Lega and near-fascist Fratelli d’Italia has seen push back. 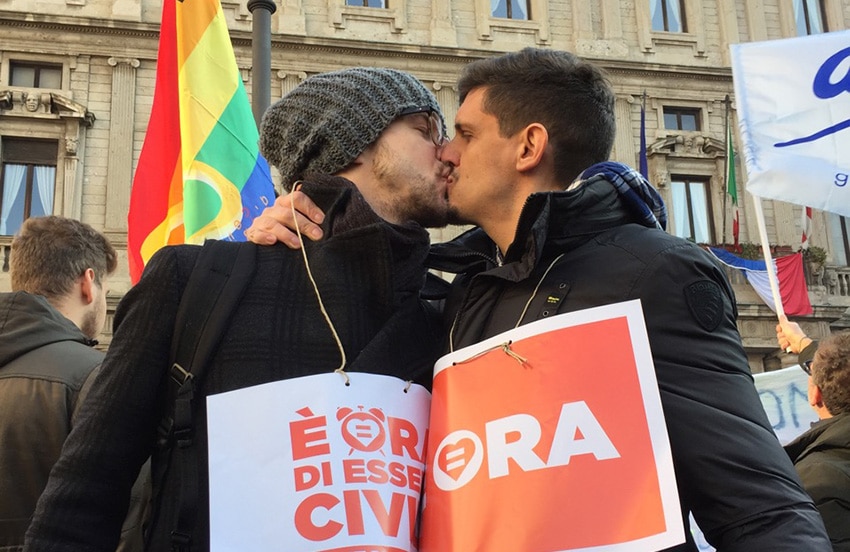 ILGA this week dropped Italy two places, to rank 34th among European countries, when it comes to respect for LGBTI rights

The demonstration itself was a small affair. None of the pyrotechnics of Greenwich Village.

There were perhaps 40 demonstrators. Many of those were from other countries: from France’s Front homosexuel d’action révolutionnaire (FHAR), the Belgian Mouvement Homosexuel d’Action Révolutionnaire (MHAR), the Internationale Homosexuelle Révolutionnaire (IHR). There was also members from Britain’s Gay Liberation Front.  Italian activists there on behalf of Fuori! included Angelo Pezzana, Mario Mieli and Alfredo Cohen.

It has also, until recently, been little marked in Italy or beyond.

The English-language Wikipedia page for Sanremo does not even mention the demo. But that looks set to change. Earlier in April an event, believed to be the first of its kind, was held to commemorate the event.

Because the point, in the end, was that it was the first. And the first protest, the first demonstration, the first brick in the wall is always the hardest. It doesn’t change things. But after the first the second and the third and the fourth, it all becomes exponentially easier.