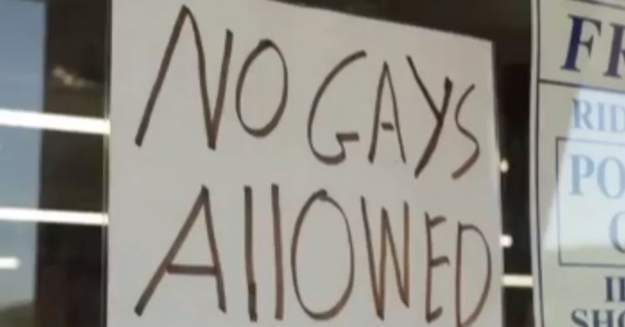 A hardware store owner in Tennessee once again made national news yesterday because he decided to put back up a sign that read “No Gays Allowed” after the Masterpiece Cakeshop ruling this week.

This is a pebble in what could eventually become bricks being thrown at this incredibly strong house that the LGBTQ community has built for decades, so its better to address this issue now than to let it fester and allow people like this owner to do what they are doing because they think they have the right to.

Here’s the deal: I am not going back into the closet just because you feel like you are empowered to do these sorts of heinous acts given the political climate that we are in. This community didn’t shut up when s**t like this was happening many decades ago, and we aren’t shutting up now.

Let’s take a look at the logical side of this sign, just for s***s and giggles. Do you really think it matters if someone is gay and they are looking to purchase an item FROM YOUR BUSINESS? They are in your store, they are an interested customer, their sexuality has nothing to do with it. This goes for a cake, a combination lock, a piece of pizza or anything else… you are there to sell your business not your religious beliefs (in my honest opinion).

It’s truly disheartening how our community feels like we need to work at this all over again given how far we have come over the years. My sexuality has no influence on a purchase from your brand, the influence it should be having is the increase in cash flow that this homosexual is helping by buying what you are selling. Don’t you get that? I don’t for the life of me understand how homophobia has crawled itself from under the rug in the workplace in this sort of manner, when the logistics in all of it really doesn’t make sense.

You want to practice homophobia in your home life and the people around you, then that’s your unfortunate choice. But putting a sign up that says “No Gays Allowed” makes no sense when you don’t even know who is gay and who isn’t gay when they walk into your stores. Does your hardware location sell gay tracking devices so they know if a gay person is present? How would you even know if the customer that is there is truly a member of our community? Maybe think of these things before putting up a badly drawn piece of cardboard on your storefront.

If what you are doing, though (and this goes for anyone who feels compelled to put up a similar homophobic piece) is strictly for your “own religious beliefs”, then the resistance you will feel from our community will be present regardless. As stated before, we are not going to back down because of where we are politically. This does not equate, as the right side has called us, an “agenda” of sorts, its finally getting everyone in this entire world to realize after all this time that we are all the same underneath all of this and that our sexuality doesn’t give you a free pass to hate.