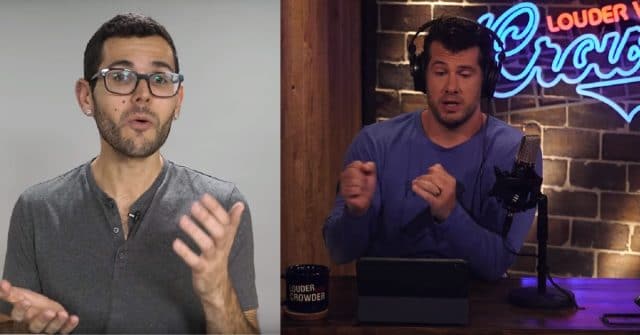 YouTube has insisted that a right-wing creator who targeted a Vox journalist with anti-gay abuse did not violate the website’s hate speech policies.

Carlos Maza, who appears in the news site’s video content, had complained publicly about persistent abuse from Steven Crowder, a right-wing Trump supporter with 3.8 million subscribers on YouTube.

In YouTube videos spanning several years, Crowder has attacked Maza as a “lispy queer,” a “little queer” and a “gay Mexican,” using racist and homophobic epithets.

In some of the videos, Crowder can be seen wearing a t-shirt bearing the slogan “socialism is for f*gs,” which he sells online.

The Google-owned video platform was spurred to review the issue after Maza publicly complained about the abuse he had received from Crowder and his followers.

However, in a public statement on Tuesday (June 4), the company said that the comments do not violate its guidelines on hate speech.

YouTube said: “Thanks again for taking the time to share all of this information with us. We take allegations of harassment very seriously–we know this is important and impacts a lot of people.

“Our teams spent the last few days conducting an in-depth review of the videos flagged to us, and while we found language that was clearly hurtful, the videos as posted don’t violate our policies.

<p dir=«ltr» lang=«en» xml:lang=«en»>I have spent two years getting targeted by racist and homophobic abuse from one of @YouTube‘s star creators.

“As an open platform, it’s crucial for us to allow everyone–from creators to journalists to late-night TV hosts–to express their opinions w/in the scope of our policies. Opinions can be deeply offensive, but if they don’t violate our policies, they’ll remain on our site.”

The company added: “Even if a video remains on our site, it doesn’t mean we endorse/support that viewpoint. There are other aspects of the channel that we’re still evaluating– we’ll be in touch with any further updates.”

On Twitter, Maza hit out at the site for the decision.

He said: “I don’t know what to say. YouTube has decided not to punish Crowder, after he spent two years harassing me for being gay and Latino.

“To be crystal clear: YouTube has decided that targeted racist and homophobic harassment does not violate its policies against hate speech or harassment.

Maza also called out the website for adopting a rainbow logo to celebrate Pride Month, while refusing to act on the harassment claims.

He said: “YouTube is hoping that this whole thing blows over and that people get distracted by their flashy Pride logo and pro-LGBT corporate propaganda.

“Don’t let them shake this off. Let them know that refusing to enforce anti-harassment policies is a threat to LGBT creators.”