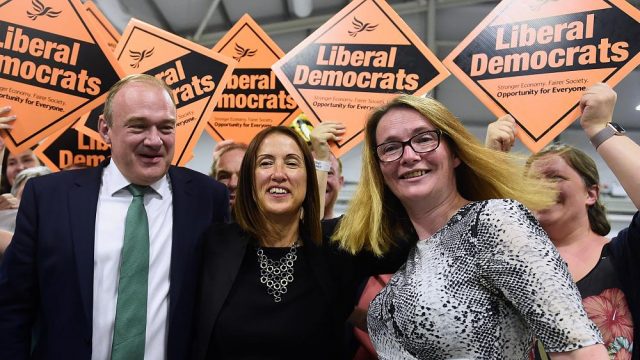 Britain’s new Prime-Minister Boris Johnson suffered the first serious blow to his leadership on Thursday when his ruling Conservative Party lost a seat in Wales, cutting its working majority in parliament to just one.

The seat in Brecon and Radnorshire was won by Jane Dodds, the candidate for the Liberal Democrats, who overturned a majority of more than 8,000 votes to beat Conservative Chris Davies.

The by-election was triggered when 19% of voters signed a recall petition after Davies was convicted over a false expenses claim.

READ MORE: Why is the Brecon by-election so important to Boris? | Euronews Answers

In her acceptance speech, Dodds said her “victory must be a turning point not just for our communities here in Brecon and Radnorshire but for the whole country too.”

“My very first act as your MP when I arrive in Westminster will be to find Boris Johnson, wherever he’s hiding and tell him loud and clear: stop playing with the future of our communities and rule out a no-deal Brexit now,” she also said.

‘Beat Brexit once and for all’

Several smaller parties including Plaid Cymru, the Greens and the Independent Group for Change had decided not to field candidates in order not to split the Remain vote.

Adam Price, leader of Plaid Cymru, said on Twitter on Friday morning that “the single most important thing in this byelection was to put party politics aside, and deliver a pro-Remain MP” and called for People’s Vote — or second referendum on Brexit.

“But if Boris Johnson is intent on a general election, he should know that Plaid Cymru and the other pro-Remain parties are committed to cooperating so that we can beat Brexit once and for all,” he also wrote.

For Boris Johnson, who stormed to the Prime Ministership in a Conservative leadership contest last week, the election was a first electoral test and ultimately a blow.

Johnson has repeatedly pledged that the country will leave the European Union on October 31 “do or die” but the parliamentary arithmetic he faces is now worse than it was for his predecessor Theresa May.

The Conservative lost their overall majority in parliament in June 2017 snap elections and have had to rely on the Northern Irish ultra-conservative Democratic Unionist Party on a supply and demand basis.

The loss in Brecon and Radnorshire means he now has a working majority of just one but the Conservatives remain deeply split over Brexit.