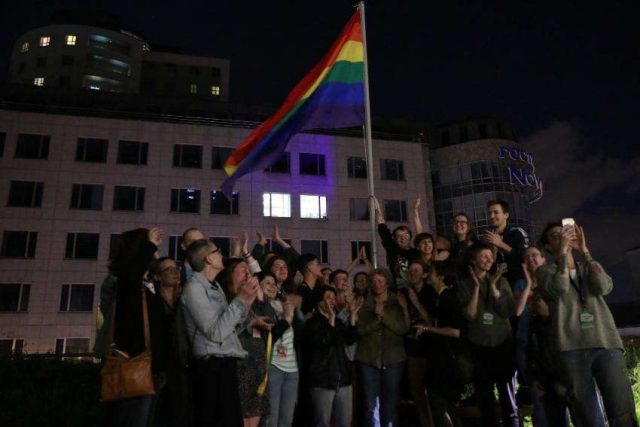 Neo-Nazi protesters at a LGBTI film festival in Moscow blocked access of filmgoers, intimidated them and even allegedly poured ammonia on one person. A person also called in a bomb threat to the festival.

Members of the National Liberation Movement and the SERB turned up to the on Thursday 23 May. But orthodox and far right protesters also targeted the festival everyday it ran from 23-26 May.

According to festival organisers, the neo-Nazis stood at the entrance to the festival holding ‘extremist’ signs. They tried to physically block attendees getting.

Organizers also claimed the protesters threw ammonia on staff member from the Canadian Embassy. Even though they called police, organizers said police did not arrive for more than two hours. Police eventually arrested about 10 people.

They told Gay Star News they planned to sue the police over the inaction.

‘Throughout all these incidents we were in contact with the police demanding that they take action and remove the protestors,’ said Manny de Guerre, the festival’s organizer.

‘Their reaction was slow and there was no interest on their part to deal with the situation. Only after repeated demands, mass telephone calls to the emergency services did the police bring the situation under control.’

But on Friday police received a bomb threat which delayed the film’s screening that day. Festival organizers warned attendees not to bring any liquids to the remainder of the screenings.

‘Hoax bomb threats were made causing events to be stopped and evacuation of the building to take place. Checks took up to in the region of 40mins to 90 mins causing delays to screenings but we were eventually allowed back in and resume screenings,’ de Guerre said.

‘Legal action is being taken against the police for inaction and we will expect the police to open investigations relating to the hoax bomb calls – a crime in Russia which carries a seven year sentence – and the throwing substances into the venue.’

Despite the threats de Guerre considers the festival a success with people defiantly flying the rainbow flag in public.

‘In spite of all these pressures we consider the festival to have been a success,’ de Guerre said.

‘We only lost and the audience showed there support / solidarity coming to events and waiting for events to resume. About 1200 people attended which stands in contrast to the 30 or 40 people who were protesting against us.

‘We made our voice heard and stood up for our rights which we symbolically celebrated by raising the rainbow flag at the end of the festival.’