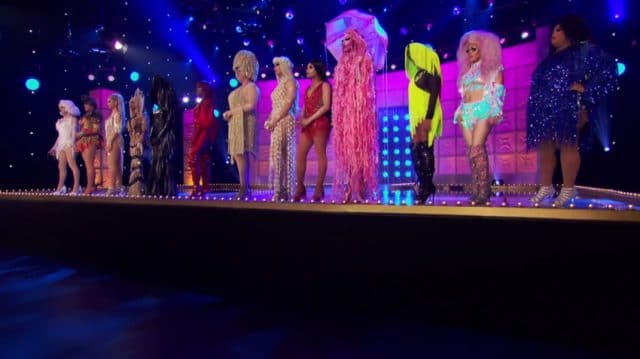 We been knew they’d do Honey the dirty, and they did.

The show spends little if any time remember Kahanna sadly so we won’t either, and it’s straight onto the storylines. We get a very clear set of confessionals from Nina West about how she really needs a win, as if there’s not another eleven contestants in the same position, so it’s already clear who is winning this one.

This is understandable with the amount of Queens still present, but the hand-hold edits of recent seasons can be a bit tiresome to the old fans.

The mini-challenge is for the Queens to sweet talk their way into Seduction’s dressing room.

Silky goes all out and nearly knocks down the stage with her weight, there’s several jokes about flat asses. It’s all right.

The winners are Nina West and Ra’Jah O’Hara apparently, and they are the team captains who get to pick their teams.

This episode is to make a Shevangelical Talkshow about a diva of their choice.

Both Nina and Ra’Jah should be judged severely for picking A’keria last.

Team Britney gets off to some diplomacy of selecting Whitney vs. Britney. Meanwhile Team Mariah clearly has no idea the first thing about Mariah Carey and it’s confusing why they selected her. RuPaul, who is hyped up on something this episode, calls them on this and gives them a few Mariah tidbits.

It’s a one-take episode, and Ross is the mentor. (Insert the classic tirades of mentors and judges not being separated)

Nina and Brooke co-host theirs. They throw in a bunch of classic Evangelical-isms and mix it with Britney references.

I can’t say I’m on board with this new policy that making references are in themselves funny, but it sells tickets, so what do I know at the end of the day.

Vanjie shows that this episode was made for her as she appears to convert an emo Yvie and Mercedes (who shows a surprising amount of energy this episode) as non-believers, and is hilarious from start to finish.

Nina and Brooke can’t help giggle as Vanjie hits the challenge hard, managing to find a way to insert her own catchphrase in and still keeping us onside.

Silky and Ariel then perform a song, Silky overwhelms Ariel, but overall, she cute.

Next up is Team Mariah with Scarlet and Shuga as the co-hosts. They sound like they’re playing madlibs with Mariah facts Ru told them, and it’s a bit of a shock how bad this really is. Scarlet in particular is the worse of the two who sounds like her anxious character from last week.

Next is Plastique trying to do a good angel-bad demon routine that doesn’t really come together, points for trying, but it just didn’t work. Plastique’s role is to convert Ariana Grande fan A’keria Chanel, A’keria is a non-event who doesn’t do much, but as everyone is performing so badly. A’keria is perhaps the best of a bad bunch by default.

Next up is Honey and Ra’Jah in the biggest disaster of the night. Their song is awful and they’re out of sync and all over the place with their notes.

Today’s runway is fringe. Great concept that allows a lot of interpretation.

Honey is first in a tribute to victims of gun violence in one of the best looks of the night.

Yvie is a pink jellyfish in full body paint.

Nina West strikes out for the third time in a row with a dirty glitter mop look.

A’keria is the best of the night in stunning opulence.

Team Britney is declared the winner, with team captain Nina West taking the win. It’s a bit of an eye-roll. These Team Leader wins make the whole episode feel a bit pointless, if it doesn’t matter how well the others do. Vanjie was clearly robbed, especially as Nina herself talks about how she broke character laughing at Vanjie and her runway was busted. If Alexis Michelle can’t win for Kris Jenner for the runway, there’s no reason Nina should have won here either. That said, she was saved episode 1 so we can expect the producers have marked her to go far in the contest.

RuPaul has some biting words for Team Mariah who “stink, stank, stunk”.

RuPaul delivers a shocking announcement, everyone in the bottom team is up for elimination in a 6-way lipsync for their lives to J Lo’s “Waiting for Tonight” (Hex Hector Remix naturally).

Plastique gives absolute hairography. A’keria and Honey deliver passion, and for such a messy scene, it’s pulled off very well by the editors.

RuPaul announces each Queen one by one to be saved, and it’s Honey Davenport who sadly gets the chop.

A truly gorgeous Queen with the heart to match and the best curated Instagram of the season. Go give her a follow today.