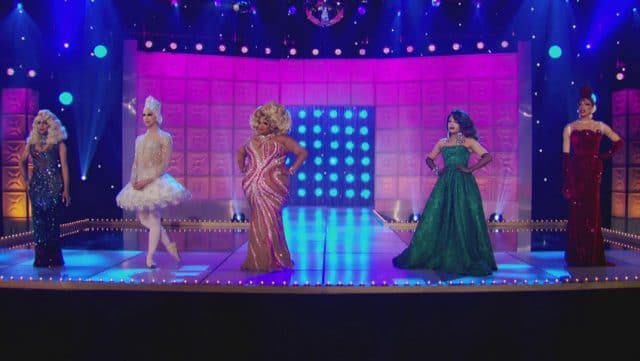 As the eleventh chapter of Drag Race draws to its close, first
we have the usual road-bump Music Video finale featuring the
yet-another-Beyonce-rip-off choreography of Todrick Hall.

Five Queens remain, and the twist this season is somebody is
actually going to get eliminated. Who will it be?

Brooke Lynn Hytes who has been praised in all but two episodes?

Silky Nutmeg Ganache, the unstoppable personality the judges can’t get enough of?

A’keria Chanel Davenport, a late-season bloomer with the only unquestionable episode wins?

Yvie Oddly, the manic pixie girl who’s set the internet on fire with her aesthetic?

Michelle Visage delivers the challenge while RuPaul is…
somewhere. Has anyone found out where Ru goes during these segments? This
year’s music video is five queens to RuPauls “Queens Everwhere”. (Call Me
Mother’s less pretty, but solid little sister). The girls are to write their
own verses (A’keria magically writes hers in about three seconds) and learn the
hardest choreography that was not done by Yanis Marshall this season. The girls
also have to make a fake episode of RuPaul’s podcast, “What’s the Tee” and talk
about how unhappy they were at eight years’ old.

A too-little-too-late redemption story comes out this episode
for Miss Silky Ganache who got hit hard with a villainous edit that has had
horrible consequences for her online. This redemption probably needed to come
much earlier in the season for it to work for most fans, but it is sweet to see
her forgive Yvie and show some vulnerability. This is the real Silky that fans
paying attention pre-season got a glimpse of.

A’keria C. Davenport talks about adopting her nephew in her
interview. Something previously unmentioned but speaks volumes on A’keria’s
strength and kindness as a human being.

Brooke’s interview involves RuPaul and Michelle telling her
she’s too perfect and boring, while Todrick feels the need to make fun of
Yvie’s voice and disability for whatever reason. Poor Markholic looks
especially confused and bewildered by Todrick this season.

We do get a “no, walk this way” Drag U gag from Todrick which
sure is a throwback.

The music video oddly features the back-up dancers almost more
than the actual Queens unlike previous challenges, which does take a way from
the Queens. The poor lighting doesn’t help.

A’keria C. starts things off with some smooth lyrics about her
being the booty queen of the season. Its sleek and sexy and off to a good
start.

Brooke Lynn is on some poles for dancing, with some pretty awful
rap and some stiff movements that don’t lead the song well. It’s not quite
Trinity the Tuck bad, but it’s certainly in the lower realms of what we’ve
seen.

Silky comes out of the toilet and does a series of quick moves
that are executed pretty well, but her verse appears much smaller and her
choreography isn’t quite as intense. But she does it well.

Vanessa is on a Micky’s-eqsue bar stage and apparently doesn’t
know her lyrics since she’s barely lip syncing. Her lyrics are smooth with the
best of the night “fish Latina, really nice to meet ya”.

Yvie comes in last and steals the show with some quick lyrics
and some impressive back bending slides across the stage.

Silky gets a few extra lines and the song finishes with a bang.

It doesn’t stack up as well as Kitty Girl or Read U Wrote you,
but it’s better than Super Queen and far better than last year’s American.

The girls return to the best stage in their best drag (kind of).
Silky, A’keria and Brooke are in outfits of nothing to note especially for the
last episode. Vanjie does especially poorly in an exposed corset and gown. Yvie
comes in gown with a twist, three eyes, three fingers, three breasts and
further cements herself as this episode’s star.

The girls are critiqued with Yvie getting full marks, A’keria in a close second. Mixed for Silky and poor for both Brooke and Vanjie. The format gets a twist, instead of a RuPaul final lip sync (though they dance to To the Moon over the credits).

The bottom two must lip sync for their lives (no winner is
announced) and its to Aretha Franklin’s “Pride: A Deeper Love”. It’s clear the
producers have been salivating for this Branjie lip sync to cap off the romance
storyline.

Brooke does her en pointe again which is fun, but after repeated
uses and it not really matching the song, and especially after she just
received this critique she seems a tad out of place. Vanjie perhaps does better
in the lip sync but their differences in track records are severe and Brooke
fairly gets her spot in the final four.

So there we have it folks, our season 11 final four: Brooke
Lynn, Hytes, Yvie Oddly, Silky Nutmeg Ganache and Akeria C. Davenport. Who will
win that final crown? But first up next week wigs will fly at the Reunion!