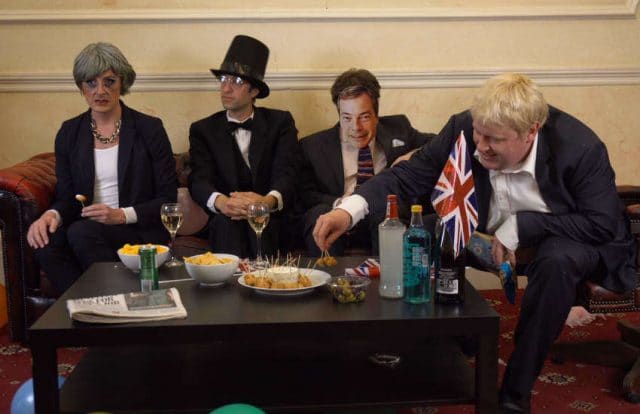 Despite the controversies surrounding this year’s Eurovision, a good old music contest seems to please everyone, even in Westminster.

Drag Theresa May (Mr Menno) isn’t going anywhere and she is hosting a special Brexit Eurovision Party to watch the final with her pals, Boris Johnson (Drew Galdron) and Jacob Rees-Mogg (Charlie Rome).

Tension erupts when Nigel Farage (Raphael Wakefield) shows up unannounced, but Theresa proves to be a great, calm host. Which is more than you can say of everyone else in this political climate.

Cracking jokes as stale as the snacks Theresa offers her guests, these clique of Brexiteers is ready to watch the final. But will they be able to tell their Eurovision from their EU? Apparently not.

LGBT+ for a People’s Vote is the mastermind behind the series of fun videos going out tonight on their Twitter page as the finale unfolds.

They are urging younger people to go vote these EU elections. The next elections to the European Parliament is expected to be held between 23 and 26 May 2019 and will be the ninth parliamentary election since the first direct elections in 1979.

After the date for the UK withdrawal from the EU has been postponed to 31 October 2019, the UK is taking part in the EU elections. And it’s crucial for young people to go and vote.

‘From large-scale polling, we know that LGBT+ people overwhelmingly are against Brexit,’ says Director of LGBT+ for a People’s Vote Kathryn Breitner.

‘And we know young people largely tend to be pro-European. Unfortunately, we also know that young people are less likely to vote, meaning their voices aren’t heard.’

‘That’s why it’s vital that young LGBT+ people get out and vote on Thursday. Nigel Farage and the Brexit party are not going to stand up for LGBT+ rights. So let’s stand up for ourselves and demand better on the 23rd. Get out and vote for a pro People’s Vote party. ‘

‘The UK Government has used Brexit to undermine human rights protections in general, and has indicated it would erode them further after Brexit,’ Gay Star News’ CEO and editor-in-chief Tris Reid-Smith said ahead of a People’s Vote march in March 2019.

‘Without a UK constitution or EU protection to guarantee our rights as an LGBTI community, we should indeed be alarmed. LGBT people in this country remember the spectre of Section 28.’

He furthermore added: ‘We know, therefore, that an unfriendly future government can enshrine homophobia or transphobia in law. Our UK community is well connected to LGBTIs in other parts of the world and has witnessed politicians reversing our rights with devastating consequences.’

Think being LGBTI has nothing to do with Brexit? Think again