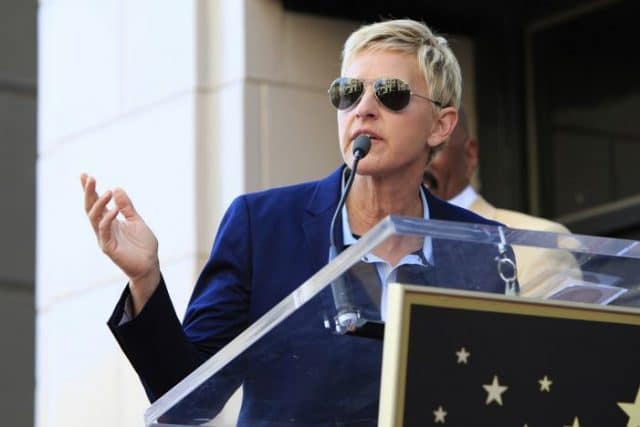 Ellen Degeneres talked about her stepfather’s sexual abuse in an interview.

Ellen was talking to David Letterman on his Netflix show My Next Guest Needs No Introduction when she brought up her stepfather, who assaulted her when she was a teenager.

She said that when she was around 15-years-old, the “very bad man” felt her breasts.

“He tries to break my door down, and I kicked the window out and ran ’cause I knew it was going to go more to something,” she said at the time. “And I didn’t want to tell my mother because I was protecting her and I knew that would ruin her happiness.”

But she said now she’s speaking out so that other girls and women will know that they can fight back.

“I’m angry at myself because, you know, I didn’t, I was too weak to stand up to [him], I was 15 or 16. It’s a really horrible, horrible story and the only reason I’m actually going to go into detail about it is because I want other girls to not ever let someone do that.”

“[Women] just don’t feel like we’re worthy, or we’re scared to have a voice, and we’re scared to say no… That’s the only reason I think it’s important to talk about it because there’s so many young girls and it doesn’t matter how old you are.”

Ellen previously talked about the abuse she faced from her stepfather in an interview with Allure in 2005.

At the time, she felt a need to say that, no, the abuse didn’t turn her into a lesbian.

“People I’ve confided in about this before say, ‘Oh, that’s why you’re a lesbian,’” she said. “But I was a lesbian way before that. My earliest memories are of being a lesbian.”