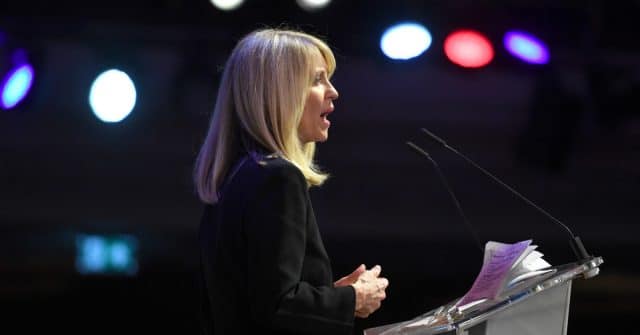 Esther McVey, the MP and Tory leadership candidate, is facing a fierce backlash from her members of her own party after saying that parents should be able to withdraw their children from LGBT-inclusive relationship education.

The former work and pensions secretary told Sky News that deciding whether young children are taught about LGBT relationships should be a matter for parents.

“I believe parents know best for their children,” she said on Thursday morning (May 30). “While they’re still children—and we’re talking primary school [age]—then parents need to have the final say.”

“You can’t pick and choose on human rights and equality. Children should understand a modern and diverse Britain they’re growing up in,” Tweeted on Thursday (May 30).

Amber Rudd, who succeeded Greening as work and pensions secretary,responded with: “Quite right. A modern Tory party should not just be proud of our LGBT+ achievements, but champion them.”

MPs from the other side of the aisle have also denounced McVey’s rhetoric, which comes as she mounts a bid to become Britain’s next prime minister.

Labour’s Dan Carden tweeted: “When I was at school the Tories’ Section 28 stopped teachers from acknowledging that people like me exist.

“I thought we’d moved on since then, but here we have Tory leadership hopeful Esther McVey throwing young LGBT+ people under a bus.”

Lloyd Russell-Moyle, a Labour and Co-op MP added: “Many of us grew up in fear of our identity. Disgusted @EstherMcVey1 – a candidate to be next Tory leader & PM – wants to prevent LGBT education to tackle homophobia & transphobia and support young LGBT people. This isn’t just wrong, it’s dangerous and illegal. Not fit to be PM.”

Protestors demonstrate against the No Outsiders programme, which teaches children about LGBT rights, at Parkfield Community School. (Christopher Furlong/Getty)

LGBT-inclusive relationship educationwill become compulsory across the UK  in September 2020 after MPs voted 538 to 21 in favour of adopting new guidance.

McVey was not one of the 21 who voted against the bill.

Some schools have already begun teaching children about LGBT relationships and families, prompting a series of protests in Birmingham.

Teachers are reportedly breaking down in tears because of hostility from parents protesting the teaching of same-sex relationships, which on May 24 resulted in one school closing its doors early.