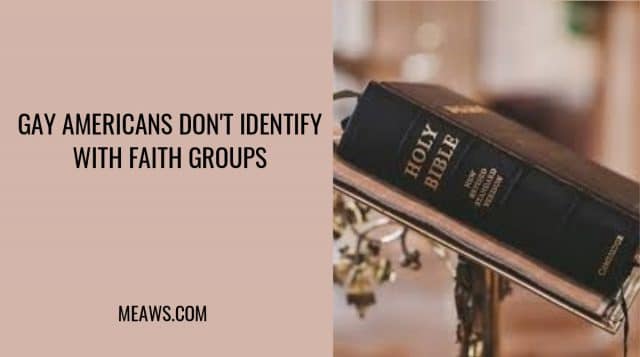 A new analysis has found that three-quarters of lesbian, gay and bisexual Americans believe in God, but many don’t identify as part of an organised religion.

The finding comes from a Pew Research Center analysis of data from the 2014 Religious Landscape Study.

According to the survey data, 77 percent of lesbian, gay and bisexual adults in America say that they believe in God, compared to 89 percent to straight adults.

But despite three-quarters of gay adults believing in God, only 59 percent of LGB respondents identify as a Christian or another non-Christian faith, compared to 78 percent for heterosexuals.

Most LGB Americans believe in God, but only one in six attends church every week (Stock photo)

Although lesbian, gay and bisexual people are twice as likely to identify as atheist or agnostic, the most popular religious identify among LGBT adults is ‘nothing in particular’.

Transgender people are excluded from the analysis as the original 2014 survey did not collect data about gender identity.

Of course, there are many reasons why LGB people, even those who believe in God, may feel uncomfortable as part of an organised religion.

Few of the largest Christian denominations in the US permit same-sex unions, though some groups including the Episcopal Church have embraced equal marriage

Attempts to push forward reforms in other groups have been divisive, with anger earlier this year when United Methodist Church members voted against allowing congregations to conduct same-sex weddings and hire openly LGBT+ clergy.

Of course, many of the most prominent religious figures in the US are also anti-LGBT conservatives.

Imagine Dragons singer Dan Reynolds recently made a plea for religious leaders to include LGBT+ people.

He said: “I plead with our religious leaders across the world to stand up for equality together. True equality – not empty words of love – but statements and actions that show our LGBTQ youth that they are ‘sinless’ and perfect just as they are.

“Until these changes are made within the doctrines of orthodox faith, we will continue to see increased rates of suicidality and depression/anxiety amongst our LGBTQ youth.”

“We are not a generation that will stand for intolerance, homophobia or racism.

“And to those that say the simple answer is for our youth to just leave religion – it isn’t that simple.

“Many of these LGBTQ youth will be kicked out of the home and put into a more dangerous situation if they denounce the faith of their family.

“Also many find peace in their faith. they love it. it brings them comfort in a sad and oftentimes scary world.”