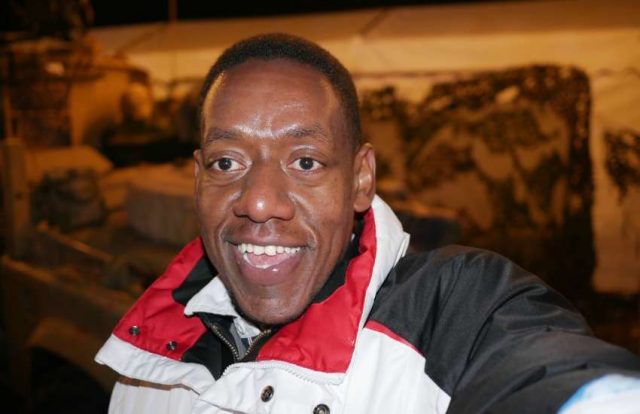 Kenneth Macharia was tired. He was driving up from London to Britstol after being in the English capital for a hospital appointment with his mother.

Macharia moved to the UK from Kenya to do his Masters degree in Mechanical Engineering at UWE Bristol over a decade ago. He was full of hope and admired the freedom the nation could give him as a gay man.

But now, as he drove up the highway, all the 39-year-old had on his mind was imprisonment.

Barred from working for almost a year, and released on bail from an immigration center, Macharia felt trapped. Not only by his own state of mind, but the impending threat of deportation.

‘The UK is very friendly and open the gay community,’ he told Gay Star News. ‘It’s not a big deal here.

‘I came here from Kenya and I brought the fear of being gay with me. It took me a while to feel comfortable.’

Kenya, sat on the coastline of East Africa, is to Macharia, a ‘hostile place.’ Under Section 162 of the penal code, homosexual beahavior is punishable by 14 years’ imprisonment. The Kenyan constitution out-rightly bans marriage equality.

But as Macharia settled, he found solace. He moved to Bristol, a city straddling the River Avon in the southwest of England, and later found employment through his work visa.

When his partner of the time moved there, too, he joined the LGBTI rugby team Bristol Bisons RFC.

‘A rugby team is a great way to feel like you’re part of the LGBTI community. I approached the Bisons and I knew I had made the right choice.

‘They’re all my friends and have been extremely supportive. I could not have coped with the amount of stress without them. They’re a big part of my support structure.’

The bureaucracy of applying for asylum has drained Macharia of his spirits. ‘It has been extremely stressful, and the Home Office have done all they can to make it stressful on every level.

‘Despite the fact that I was giving them lots of evidence to prove that I am gay, they still claim that I am not gay. It was a shock! Before submitting the application, I read through every line.

‘They recognize that someone coming from a country where being who they are is illegal, it can be really difficult to prove their sexuality. But having lived in the UK and been free to be who I am, I was sure I would be fine.’

Moreover, Macharia sent the Home Office details of his ex-partner. Visas, electoral roll documents, bills, and photos of the pair together were all sent over as part of the application. Even LGBTI FaceBook groups Macharia was part of were included in the application.

But caseworkers refused the application in December 2016.

Macharia’s life fell apart in November 2018. He awoke to a mild Fall morning, the clouds breaking from the rain earlier. The authorities detained him later that day.

‘That’s when it dawned on me,’ he said, his voice cracking, ‘it could actually happen. They could send me back.’

Locked in a removal center near Heathrow Airport in southwest London, authorities detained him for nearly two weeks. The Home Office had rejected his appeal for asylum.

‘I was surprised by the treatment I received. The Home Office do everything to make it really difficult to apply for asylum.

‘I wanted to make sure that my final application would be okay, and that it would get me back to normal life.

‘I felt hopeless, I was locked-up in a cold cell feeling depressed.’

Fellow Bison players, and celebrities including Stephen Fry, rallied together to free him. Nevertheless, Macharia found the Home Office deciding to reinstate his deportation notice and actively opposed bail.

At his bail hearing, Alex Wright, a caseworker at the Immigration Advice Service, said: ‘I would have thought the prominence this case has received would indicate that potentially there would be a higher risk of mob violence upon return.

‘I hope they would see some sense.’

It appeared that pressure from a proved powerful; the courts granted him bail, and his freedom.

Without commenting directly on Macharia’s case, a Home Office spokeswoman : ‘This Government has a proud record of providing protection for asylum seekers fleeing persecution because of their sexual orientation or gender identity.

‘All available evidence is carefully and sensitively considered by in light of published country information.

‘All decisions on claims based on sexual orientation are reviewed by a second experienced caseworker.’

A total of 23 were refused, while two remained works in progress during the July 2015 to April 2017 period.

‘This has been going on for so long. Being in limbo,’ he said, the exhaustion palpable even over the phone.

‘It has been a long desperate process that is not going to be over anytime soon.’

He was prescribed antidepressants and has been forced to rely on his 70-year-old mother Jacinta working extra hours as a nurse to support him while he lives in Glastonbury, Somerset.

Under present rules, asylum seekers are only allowed to work if they have waited more than a year for a decision on their application.

As the exhaustion piles, Macharia is desperate. Three years have passed since May 2016 when concerns over his residency were first flagged. Macharia has called on Home Secretary Sajid Javid to decide the case.

‘Before I started this process I was thinking the UK is a champion of human rights.

‘Javid should show the UK does live up to what it claims to be as a country that protects human right.’

For now, all Macharia can do is try to get some rest, and continue to wait.