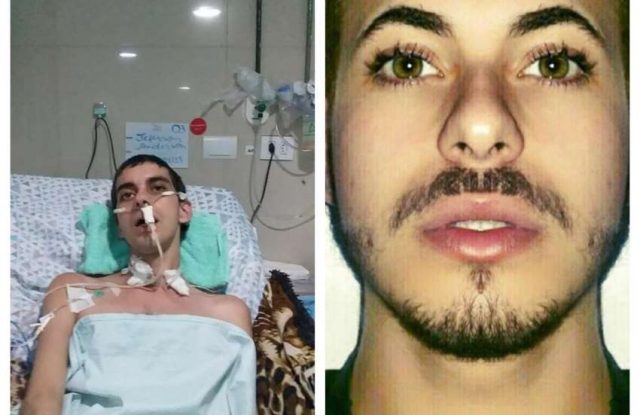 A 22-year-old man in Brazil who spent one month in a coma after a violent assault has remained in a near vegetative state.

On 7 December last, Jefferson Anderson Feijo da Cruz, was out celebrating the end of the school year with friends in the north-east city of Moreno.

Feijo da Cruz told his friends he would return soon after going to urinate. But as too much time passed, becoming concerned, his friends went to look for the young student.

According to a Facebook page run by his family, his friends found him under a slab. They saw Feijo da Cruz in an undressed state, bloody, unconscious and even choking on his blood.

His family claimed the motive for the attack was robbery and possibly, homophobia.

‘It was verified that he had several injuries on his body, head, lung injuries and cranial trauma due to the assault,’

‘He had a clot that compressed his brain, and he had to have emergency surgery’

Feijo da Cruz awoke after a month in a coma, but when he woke ‘he was not the same’.

‘He did not speak, did not walk, nor express reactions,’ his family wrote.

‘He had to have a tracheotomy to improve his breathing, he only fed by catheter and he was transferred to the Tricentenary hospital (in Olinda) to avoid further complications in his case.

But five and a half months after the vicious assault doctors discharged Feijo da Cruz from hospital. Now, his family must bear the expensive costs of caring for him.

‘His state required maximum care that could not be covered by his parents and friends,’ his family wrote.

They’ve started a to help cover the high costs.

‘Why are we telling Jeff’s story to you guys? Because he is a young man full of dreams, plans and desires that needs our help to continue fighting for life,’ they wrote.

Brazil is one of the most dangerous places in the world for LGBTI people. In 2018,