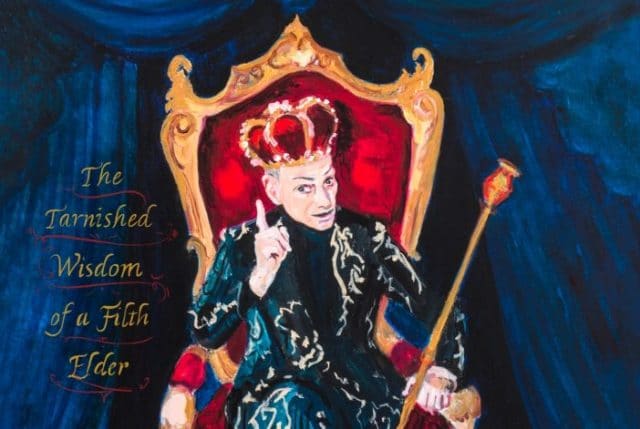 Is Provincetown too gay? Are the local drag queens too aggressive in accosting unsuspecting tourists? Is the Pilgrim Monument an appropriate town symbol?

Those are a few of the questions raised by one of Provincetown’s most famous seasonal residents, gay filmmaker and writer John Waters. In a new book of essays, Mr. Know-It-All: The Tarnished Wisdom of a Filth Elder, Waters devotes a chapter to the town where he’s spent his summer vacations for 55 years.

He extols many of the charming and quirky qualities that keep him coming back, such as the “cinematic” views at his “favorite beach in the whole world,” Longnook, and bodysurfing in the ocean there (“complete bliss.”) But he also doesn’t hold back in listing what he calls his “summer gripes.”

One of them, and perhaps the most surprising one considering the source, is a concern that the town, which has become known as a welcoming destination for LGBTQ vacationers, may be too gay. “Here’s what’s really going to get me in trouble,” he writes. “Sometimes it’s overly gay here.”

Waters focuses on the abundance of drag queens who can be seen on Commercial Street and other parts of town. “There are many great drag queens appearing here (Dina Martini is my favorite), but I’m still scarred from the awful ones from the past that seemed like the Amos and Andy of gay culture in Provincetown when I first got here,” he writes.

“Would any gay man really want to be Arthur Blake, the insult comic who had been in Bette Davis movies but spent his later years in Provincetown drinking and giving all gay people bad reputations by performing in hideous Tallulah Bankhead drag?

“Worse was potbellied drag queen Sylvia Sidney, who played here for years and horrified passing tourists every afternoon when he’d ‘bark’ his act out front of the club as drag queens are still contractually obliged to do today. ‘You ugly c*suckers,’ he’d yell to families through his missing teeth, dressed in a Clarabell red wig and ill-fitting tacky gowns.”

Waters noted one time when he was “minding my own gay business on the street” and a hefty drag queen addressed him with: ‘Hi, girl.’

“I’m not the butchest thing in the world, but I’m pretty obviously a man,” he wrote. “Too familiar or too gay? You be the judge.”

Waters’ observations about drag queens are surprising because he has played a key role in introducing drag queens to mainstream America, by featuring the transvestite actor Divine in Pink Flamingos, Female Trouble and Hairspray, among other films he made. In addition, Waters has a large and devoted gay following, and business owners in Provincetown promote the town as a gay mecca.

But that’s not Waters’ only gripe about Provincetown. He’s also not a fan of dogs on the beach.

“Provincetown has been named the Most Dog-Friendly Town in America and I’m afraid to tell you it’s true,” he writes. “I live on the beach, and every day while I’m trying to write, I hear, ‘Fluffy, stop it!’ “Fluffy, stop barking.’ ‘Heel! I want to shout about a hundred times a day – that’s the only word a dog understands.”

He dislikes the trolley tour buses that are “too wide for our little streets and block foot traffic every time they stop to announce obvious facts.” And he points out that Provincetown isn’t easy to get to, especially by water.

“You can take the ferry, but a lot of times the whole boat is filled with pukers,” he warns. “It can be rough out there in that two-hour ocean ride from Boston. Once I picked up a friend who had taken it and the whole side of the boat was covered in vomit.”

Then there’s the 252-foot-tall Pilgrim Monument, the tallest building in town. “All these years in Provincetown, I can’t decide if I love it or hate it,” Waters confesses. He writes that a “smart art-collector friend” of his once visited and called it ridiculous.

“She wasn’t being snarky,” he writes. “I guess unlike most tourists here she had seen the original Torre del Mangia, in Siena, Italy, from which ours is completely copied. Neither monument has anything to do with the Pilgrims or Provincetown. It is kind of ridiculous. A Boston architect complained, ‘If all they want [in Provincetown] is an architectural curiosity, why not select the Leaning Tower of Pisa and be done with it?”’

After weighing the pros and cons, Waters says, “I guess I’ll agree with all the locals today and love the Pilgrim Monument, too…The gift shop is pretty great, and right outside is a popular spot for gay weddings and receptions…It may be ‘ridiculous’ as my friend innocently commented, but it’s ours.”

Published by Farrar, Straus and Giroux, Mr. Know-It-All is Water’s ninth book and came out on May 21.

The book is part memoir, part advice book and part celebrity tell-all, with anecdotes about many of the actors with whom Waters has worked over the years, including Kathleen Turner, Tracey Ullman, Johnny Depp, Tab Hunter and Divine. There are also chapters on a wide range of non-cinematic subjects, from Yippie protests to Brutalist architecture.

Provincetown is one of many subjects that come under fire in Waters’ book. He’s also critical of the Catholic church, pretentious restaurants, first-class accommodations on certain airlines, and other targets. In a recent interview, he said he’s isn’t writing to be ironic or to mess with readers.

“It’s not really told ironically,” he said of the book. “I believe everything I say in it. But I hoped to write a humorous book at the same time.”

The chapter that critiques Provincetown is actually one of two that feature the town at the tip of Cape Cod. The second is a chapter in which Waters, 73, took LSD with two friends in Provincetown, to see what it’s like to take LSD after 70. (Spoiler: it was “f-ing fun.”)

Given the positive reaction and lack of any mental meltdowns, “You are going to reinvent the market for LSD,” he quotes one of his dealers as saying.

Despite his critical observations in the book, Waters plans to spend the summer in Provincetown again this year. In fact, according to his representative at FSG, Lottchen Shivers, he asked to move up the publication date in large part so he could finish his book tour in time for his annual getaway.