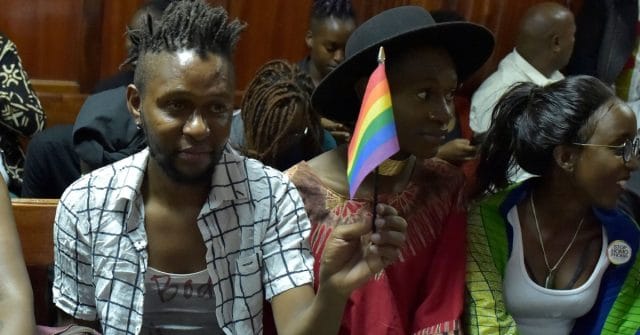 The High Court in Kenya has ruled not to decriminalise gay sex in a disappointing decision for LGBT+ activists hoping to repeal sections of the country’s penal code.

Three judges made the judgement on Friday (May 24).

The ruling means that Sections 162 (a) and ©, 163 and 165 of Kenya’s penal code remain in place and homosexual relations are still criminalised.

These parts of the penal code – introduced by the British Empire in 1930 – criminalise sodomy, and make sexual acts “against the order of nature,” interpreted as including same-sex sexual relations, currently punishable by 14 years’ imprisonment.

LGBT+ activists in Kenya had been “cautiously optimistic” ahead of Friday’s ruling, Mercy Njueh of the National Gay and Lesbian Human Rights Commission (NGLHRC) in Kenya told PinkNews their hopes are now shattered.

“A positive ruling would have allowed LGBTIQ+ persons to enjoy their basic human rights, and be able to live as equal Kenyans,” she said.

The High Court was supposed to issue its verdict in February, butpostponed it at the last minute.

Téa Braun, director of the Human Dignity Trust, told PinkNews that the judgment is “very significant for Africa, as it will be worldwide.”

“This would have been the first court decision on the continent since South Africa in 1994 to rule on the issue of LGBT criminalisation, and could have signalled the beginning of the wider dismantling of these archaic and discriminatory laws,” Braun said.

“The trend across the Commonwealth and the world is already clear: these laws have no place in a constitutional democracy and they must go. At the Human Dignity Trust, we hope that other Commonwealth governments will save litigants and taxpayers the time and expense of going to court and just repeal these laws,” she said.

Njueh, a communications assistant at NGLHRC,previously told PinkNews that Friday’s (May 24) court ruling was about human rights.

“Even heterosexual people, if the law was followed to the very end, would be persecuted,” Njueh told PinkNews.

“What we’re fighting for is not just about gender and sexual minorities. It’s about human rights. We are pushing for Kenyans, who are recognised by the constitution, to be allowed to enjoy their human rights, without having to fear.”

It was hoped that today’s verdict would open the floodgates for the repeal of similar legislation in other countries in Africa, where homosexuality isstill illegal in 32 out of the continent’s 54 nations.

In particular, it was hoped that a positive ruling would have a strong impact on countries in the eastern African region, including Uganda, Tanzania, Rwanda and South Sudan.

That is no longer the case.

“Attitudes do not change overnight. Education and awareness are key. LGBTQ+ people being able to speak out and be themselves is key, so that people can see that they are just like everyone else, but for who they choose to love,” says Braun.