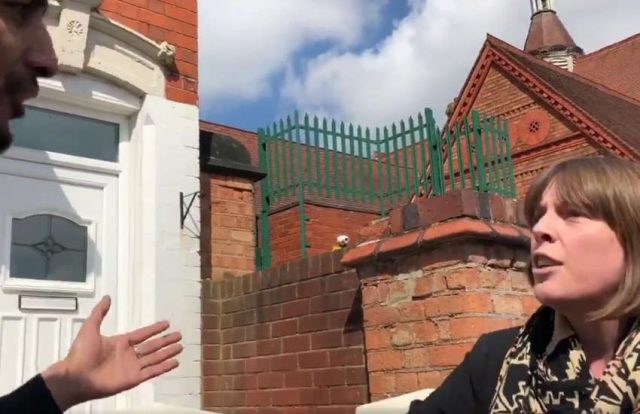 Labour MP Jess Phillips has confronted the leader of the anti-LGBTI protests spreading across British schools.

This comes as campaigners claim parents prevented around 600 children from going to their lessons due to LGBTI-inclusive lessons today (20 May).

In the video, Phillips – MP for Yardley in Birmingham – confronts Shakeel Asfar. He is the coordinator of the protests outside Anderton Park Primary, despite having no kids who attend.

Phillips says: ‘I don’t agree with the protesters. I don’t agree you get to pick and choose which equality you can and can’t have.

‘I think what’s happening here, the worst thing about it, is it’s damaging the reputation of a peaceful and loving community I have lived in my entire life.’

She also denied the number of children prevented from attending lessons was as high as 600.

Phillips also wrote: ‘Our equalities laws protect us all. I will not be called aggressive for wanting to protect all of the community, Muslims too. This is doing deep damage to the Muslim community and these protesters do not represent Birmingham.’

Last night (19 May), pro-LGBTI activists alleged an angry group of men threw eggs as they hung messages of support to the teachers of the school. Officers arrived after residents and activists called 999.

BirminghamLive reported today that a resident claimed a group of people wearing masks covered their car in eggs.

Jess Phillips has recently been targeted by far-right UKIP MEP candidate Carl Benjamin. He has said on multiple occasions he ‘wouldn’t even rape’ Phillips.