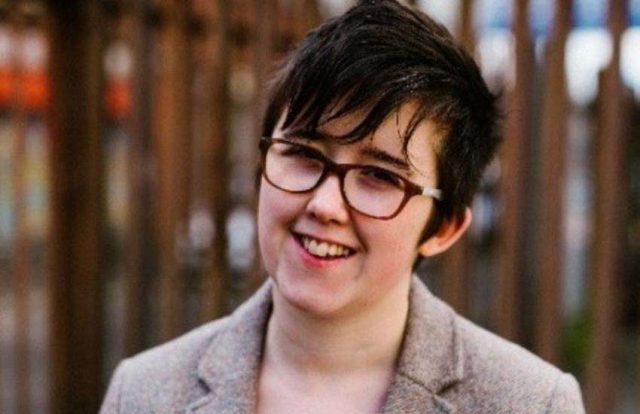 Lyra McKee’s sister has offered to ‘support’ the 29-year-old journalist’s killer if they turn themselves in to authorities.

Nichola Corner said the unknown assailant’s guilt is comparable to the guilt of her family.

McKee was shot dead while reporting on riots in Londonderry, Ireland, on 18 April.

Corner was speaking at a . It marked the end of a three-day walk from Belfast to Derry.

Trekking along just over 70 miles, hundreds of supporters set off from Writer’s Square near the city center. Many donned t-shorts in her memory and waves flags with messages of peace.

In the walk’s final leg stretched between Drumahoe into Derry, more than 200 people joined and gathered in Guildhall Square. Corner addressed the alleged killer(s) in her speech, just metres from the Peace Bridge.

‘It is my belief that when you went out on the night of the 18 April, you did not intend to turn yourself into a killer,’ she said.

‘Yet the events as they developed led to that becoming your reality. You are now a killer, now the person who killed Lyra McKee, my baby sister, and you cannot take that back.’

Corner explained her hopes to one day meet the killer because ‘Lyra needs justice and this country demands true peace. I am prepared to be there as you hand yourself in.’

‘I promise you here and now that I will meet you at any police station anywhere on this island to support you in taking the brave step to hand yourself in and allowing my sister the justice she deserves.

‘I know it will not be easy . That’s why I am reaching out to you, because sometimes the right thing is the most difficult.’

She added: ‘Together we can end this nightmare, because failure is not an option.’

Concluding her speech, Corner held up a copy of the 1988 Good Friday Agreement.

The violence that night came on the 21st anniversary of the Good Friday agreement. The 1998 accord that brought an end to decades of conflict in the region between republicans and nationalists.

The former side believe Northern Ireland should be part of a united Ireland. While the latter want it to remain British.

According to the Committee to Protect Journalists, McKee, 29, was the first journalist to be killed in Northern Ireland since 2001.

In the search for her killer, the police released CCTV footage of the evening. It showed her standing in a crowded street in Creggan, a heavily Catholic area of Londonderry.

More than a name in a headline. More than a byline. Lyra McKee’s partner, , spoke at a vigil in Londonderry with fondness.

McKee was ‘the woman I was planning to grow old with,’ Canning said. But her killer has ‘snuffed out’ her dreams in ‘a single barbaric act.

‘We are all poorer for the loss of Lyra.’

Moreover, as candles burned and banners fluttered, the vigil brought two sides of Ireland together.

Furthermore, photographers pictured the leaders of the two main rival parties of Northern Ireland, Mary Lou McDonald (Sinn Fein, a republican party) and Arlene Foster of the Democratic party, standing side by side.