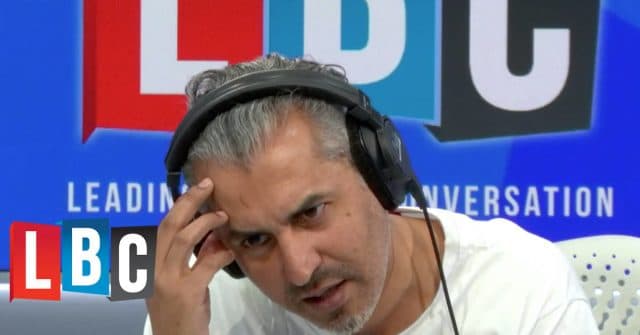 LBC radio host Maajid Nawaz called out a caller during a discussion on the recent anti-LGBT protests in Birmingham.

During Nawaz’s LBC show on Saturday (May 25), Nawaz ended a conversation with a caller during a talk about protests outside a primary school in Birmingham.

Anderton Park Primary has been the centre of recent protests after Muslim parents said the school was promoting LGBT equality with its pupils.

The host, who previously took on a caller who said that they are not anti-gay but didnt believe in same-sex marriage, aid the rights of British Muslims “do not extend to having the right to stifle out the existence of another minority community.”

After asking for listeners to weigh in on the debate, a caller called Joe rung in to speak with Nawaz.

“It’s not like being black, it’s not having a culture, it’s a behaviour, it’s as if the school decided to start teaching kids that it’s okay to beat your wife.”

A shocked Nawaz replied with “are you serious?”

“Are you that illogical that you can not see the distinction between a physical assault and a sexual behaviour with consent with another person?,” the radio host asked.

“You just decided it was okay to make the comparison and say that teaching somebody in school that gay people exist would be like teaching them it’s okay to beat your wife.

“And you think that’s just going to wash? You think people are that stupid that they will follow your trial of thought after that statement? Unbelievable.”

Nawaz was then quick to end the chat with Joe before the caller could elaborate any further on their comments.

Maajid Nazaw responded to comments from the caller. (LBC)

Recent protests against the No Outsiders programme, LGBT-inclusive education taught in schools, have resulted in the Muslim community showing solidarity with the LGBT community at Birmingham Pride.

Members of Birmingham’s Muslim community walked at the front of this year’s Pride parade alongside the primary school teacher at the centre of a row over LGBT-inclusive relationship education.