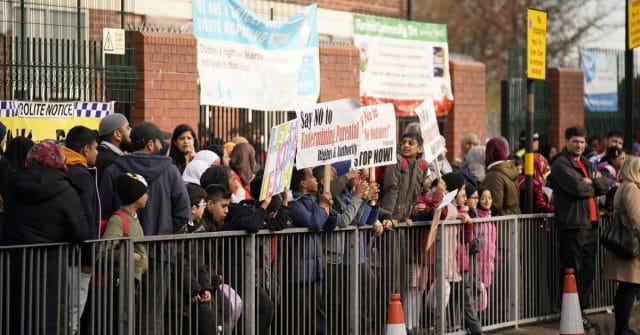 The Birmingham school protests against LGBT-inclusive relationship lessons have been worsened by outside forces lying to parents, according to a mediator.

Human rights lawyer Nazir Afzal was brought in to broker peace between parents and school officials over lessons which taught young children about different types of families, including those with same-sex parents.

Parents have been put “under pressure” to join in the Birmingham school protests, Afzal added, explaining that the “vast majority” support the school and want an end to the dispute.

Demonstrations have been taking place outside of Birmingham schools since March, with one—Anderton Park Primary—forced to close early on Friday (May 24) due to safety concerns around a mass gathering.

The event was organised by Shakeel Afsar, a man who does not have children at the school.

On May 22, Afsar told This Morning hosts Phillip Schofield and Holly Willoughby: “Parents feel that in primary school, we should be teaching our children about humanity, respect for humanity.

“Parents at the school shouldn’t feel like the school is over-promoting one narrative and not the other and we should try to make it transparent.”

Schools across Birmingham have insisted that the lessons simply place LGBT+ people on an equal footing, teaching children about same-sex parents as part of lessons on different families.

“Equality is a real strength of ours, the children talk about it all the time,” Sarah Hewitt-Clarkson, headteacher of Anderton Park Primary School, told PinkNews on March 21.

She added that the school’s policy is to underline the Equality Act 2010.