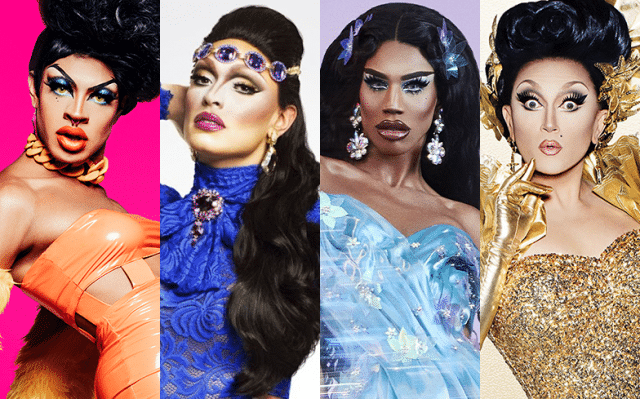 In celebration of the jaw-dropping season 11 finale, we at GAY TIMES have created our own definitive ranking of all 15 sickening seasons of RuPaul’s Drag Race.

Over the course of ten years, we’ve been blessed with eleven gag-worthy regular seasons and four All Star editions, each of which have provided us thirsty-ass drag fanatics with plenty of charisma, uniqueness, nerve and taaalent heeeeeenny.

Bebe, Tyra, Raja, Sharon, Chad, Jinkx, Bianca, Violet, Bob, Alaska, Sasha, Trixie, Aquaria, Monét, Trinity and – SPOILER ALERT! – Yvie have all won the coveted crown and title of America’s Next Drag Superstar – but which of their respective seasons comes out on top?

We spilt all the T…

Most iconic moment: Raven vs Jujubee – Dancing on My Own

Is anyone surprised though? All Stars 1 ranks as our lowest ever season of Drag Race because of the sheer amount of talent that was wasted on the dreadful twist, which saw the queens compete in teams of two. It’s disappointing because we had the likes of Manila Luzon (robbed!), Raven, Jujubee, Latrice Royale, Tammie Brown, Chad Michaels, Shannel, to name a few. With a cast like this, it could’ve been the best season of Drag Race ever.

Most iconic moment: Shannel – “I am beautiful”

The first season of Drag Race – also known as the “lost season” – really isn’t appreciated enough. Yes, we didn’t have Snatch Game, and we were cursed with that vaseline filter, but it gave us so many incredible queens such as Bebe Zahara Benet, Nina Flowers, Tammie Brown, Ongina, Shannel… The reason why it’s ranked so low is because it wasn’t the Drag Race we all know and love today.

Ranking season eight below seven may be a controversial move. However, the season was one of the shortest – clocking in at only ten episodes – didn’t have many iconic moments, and was the most predictable season of the entire series. Did anyone really doubt Bob the Drag Queen would walk away with the crown?

Season seven receives a lot of hate from fans, and it’s understandable. A cast consisting primarily of fashion queens were wasted on a season overstuffed with scripted comedy challenges. Despite this, the season delivered some of the most beloved Ru queens ever in Katya, Pearl, Miss Fame, Ginger Minj, Violet Chachki, Max, Kennedy Davenport, Jasmine Masters…

Drag Race’s most recent season wasn’t bad, by any means. Compared to other shows out there, it’s still our favourite, and it was a thrilling ride from start to finish. But when you place it within this line-up, it was – like Nina West in the finale – “meh”. The drama felt mean rather than shady, it was easily the worst Snatch Game of the entire series, and Nina’s elimination hurt. IT HURT. However, Yvie is, without-a-doubt, one of the most memorable winners in HERstory, Brooke and Vanjie provided us with the first ever on-screen romance, and “OPPALANCE” became another massive viral moment.

Most iconic moment: “Tyra is a complete bitch”

The sophomore season of Drag Race is where the show came into its own. It’s possibly the bitchiest of them all, with iconic throwdowns such as Mystique vs Morgan (“Bitch, I am from Chicago!”), Tatianna vs Tyra (“I don’t think you’re seeing that Tyra is a complete bitch”) and Tyra against, well, everyone. Season two also featured the first ever Snatch Game, and the lip-syncs were turned up a notch with drag assassin, Jujubee. It’s an absolute classic.

The third instalment of All Stars may have not lived up to its predecessor, but it sure gave us some legendary, gag-worthy scenes. Aja became the breakout star (that death drop tho!), season one winner Bebe Zahara Benet made an unprecedented comeback, and BenDeLaCreme broke the mothertucking internet when she eliminated… HERSELF. We’re still not over it.

The show’s tenth season featured the most viral moment of the series so far when the iconic, groundbreaking and revolutionary contestant, Miss Vanjie, sashayed away (backwards) from the main stage and recited her own name over 12,000 times. Sharon Needles’ drag daughter Aquaria also proved to be one the most sickening fashion queens in HERstory, several fan-favourites were eliminated by lip-sync assassin Kameron Michaels, and The Vixen and Eureka provided fans with one of the most explosive feuds

Most iconic moment: Valentina – “I would like to keep it on please”

Again, this may be a controversial placement, but this season provided us with some of the most talented contestants: Shea Coulee, Trinity Taylor, Valentina, Peppermint, Sasha Velour and Alexis Michelle all came to play (that). To be honest, pretty much everyone in the cast had charisma, uniqueness, nerve and talent. It also ranks so high because it had some of the most iconic Drag Race moments ever: Eureka’s injury, Valentina’s elimination, Sasha’s rose-petal lip-sync to So Emotional, to name a few.

Most iconic moment: The double crowning

Even though it’s our favourite show, we thought it was a bit overkill to have two seasons of All Stars within a year. But with a cast like this, we quickly STFU. Trinity, Monét, Monique, Naomi, Jasmine, Valentina, Farrah and Gia came back for a second shot at the crown, joined by All Stars 1 contestants Latrice and Manila. Despite first competing eight years ago, Manila proved herself to be the frontrunner of the season. Even though she had the best track record, she was eliminated by Naomi… and it was her first time in the bottom! Gag of the century? Yas. The season also boasted several jaw-dropping lip syncs (Naomi vs Gia, Trinity vs Manila, Valentina vs Monét), and made history with its first ever double crowning.

Most iconic moment: “GET HER OFF OF ME!”

In hindsight, season three is probably the hardest season of Drag Race. It had more obscure sewing challenges than any other season, such as: holiday thrift store drag; couture cake inspired outfit; three outfits for a hair show – one made entirely of hair; and a dress made out of money. It gave us some jaw-dropping lip-syncs, with Manila vs Delta, Raja vs Carmen, Mimi vs India, and the closest top two in the show’s HERstory.

Half of the queens on season four are filler (sorry bout it). However, the season made up for it with the most iconic rivalry with Sharon and Phi Phi, one of the kuntiest contestants in Willam, and one of the best lip-syncs ever from Dida Ritz. It also had the first ever disqualification, and provided us with the most loveable queen in all ten seasons… Latrice Royale.

While season four had the show’s best rivalry, season five had the best underdog storyline. Jinkx Monsoon competed in a season of heavyweight drag competitors, such as Roxxxy Andrews, Alaska, Detox, Alyssa Edwards and Coco Montrese. Despite not being as polished (at the time) as those fierce queens, she broke the record for most consecutive weeks in the top, with nine, and cemented herself as one of the most talented competitors on the series. The season also boasted some of the biggest personalities in all ten seasons of the show, hence why five of them appeared on All Stars 2.

Now this is peak Drag Race. Season six was the perfect blend of comedy and drama, and had a good mix of design and performance challenges. It’s often considered to have the most iconic top three in Bianca Del Rio, Adore Delano and Courtney Act, and the lip-sync showdowns were ah-mah-zeng. Trinity K Bonet may have not slain every single challenge, but she established herself as one of, if not best lip-sync queen of all time. It was also the season of the catchphrase… OKCURRRRR!

Most iconic moment: Alyssa Edwards vs Tatianna – Shut Up and Drive

How could this not be number one? All Stars 2 is the definitive season of Drag Race. It boasts the best cast in the show’s HERstory, with drag legends such as Alaska, Katya, Detox, Roxxxy Andrews, Alyssa Edwards, Tatianna, Phi Phi O’Hara, Ginger Minj, Adore Delano and Coco Montrese. Revenge of the Queens is probably the best ever episode, providing fans with the most jaw-dropping lip-sync of all time when Tatianna and Alyssa slayed the house down to Shut Up and Drive by Rihanna. Oh, and that mirror scene? Cooped. Phi Phi’s reaction? Gooped. The confrontation? Mother-tucking gagged… henny.

All eleven seasons of RuPaul’s Drag Race are available now on Netflix UK.