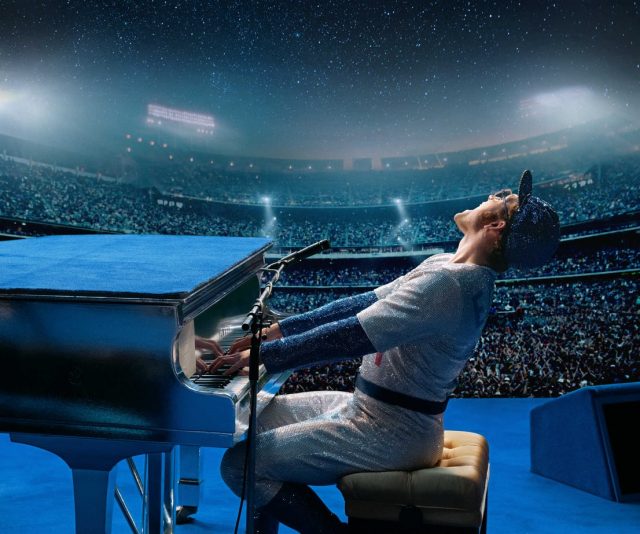 When the signature number in Rocketman, “I’m Still Standing,” kicks in at the end of the new Elton John biopic starring Taron Egerton, there is genuine euphoria to be felt. Not just at John’s rags-to-riches-to-ruin-to-redemption story, but because Rocketman is a musical that brings new energy to a worn genre.

Director Dexter Fletcher’s biopic contains all the elements of the traditional musical biopic—the tragic childhood, the rise to fame, the greedy manager—but blends it together with madcap fantasy elements that befit the flamboyance of John’s own stage shows. The result is that the film doesn’t feel a paint-by-numbers chronological affair, instead weaving between the past, present and fantastical. John’s songs punctuate the action—some performed by Egerton’s John, some performed by other characters, and some performed in fantasy sequences—with musical theatre-like vibrancy.

Rocketman begins with young Reg Dwight, a piano-playing wunderkind, who lives with his self-absorbed (Bryce Dallas Howard) and is pained by the lack of affection show by his father (Steven Mackintosh). Reg rechristens himself Elton John and a chance encounter with songwriter Bernie Taupin (Jamie Bell) changes both of their fortunes. The plot charts John’s early success and his meeting future manager and lover John Reid (Richard Madden), which is followed by astronomical success and with it the excess of drugs, alcohol and sex.

Fletcher’s film centres largely on John’s addictions—opening and concluding at a 12-step meeting—in an unvarnished way that Bohemian Rhapsody failed to. Authorised biographical films risk the danger of white-washing history, but Rocketman, which counts John as an executive producer and his husband David Furnish as a producer, isn’t afraid to play it ugly and make Egerton’s John almost egregiously insolent. In fact, screenwriter Lee Hall’s script owns John’s hedonistic transgressions as Egerton declares he loved every minute of the sex and drugs.

Leading man Egerton is pitch-perfect as John, straddling both the superstar’s showmanship and addiction-induced mania with equal verve. Egerton’s performance is aided by the film’s lavish and bang-on costume department—kitting out the actor in glittered-and-sequinned baseball costumes, preposterous headgear and, of course, those famous spectacles.

Rocketman is a fantasy musical that captures a certain chapter of John’s story—a mighty compelling chapter at that—thus omitting later life events, like his marriage to David Furnish, his indelible performance at Princess Diana’s funeral, and the birth of his sons. But that leaves space for a more traditional biopic at a later stage.

Rocketman is released in UK cinemas on May 22.