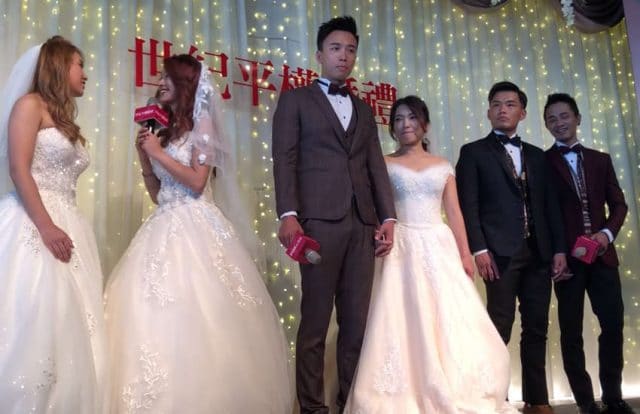 A day after Taiwan’s parliament voted to legalize same-sex marriage, two gay couples and one straight couple held a joint wedding on Saturday (18 May).

The social media stars organized the ceremony in support of same-sex marriage and promote gender equality.

Taiwan’s parliament on Friday (17 May) became the first country in Asia to legalize same-sex marriage.

The president is expected to sign the bill into law before this Friday (24 May).

Saturday’s event, therefore, was a wedding ceremony and celebration and the couples will likely register with the government at another time.

According to the Taipei Times, all three couples said their parents disapproved of their relationships.

But, they said, they never gave up communicating with their families.

Chi Chia-wei echoed this perseverance in his speech. He said people had labeled him a ‘pervert’ when he first lobbied parliament for same-sex marriage.

The legendary activist also encouraged the newlyweds to love, trust, help and tolerate each other, according to the Taipei Times.

He congratulated Taiwan in being the 27th country in the world to legalize same-sex marriage.

Thousands of LGBTI rights supporters gathered outside parliament and cheered as the vote was announced.