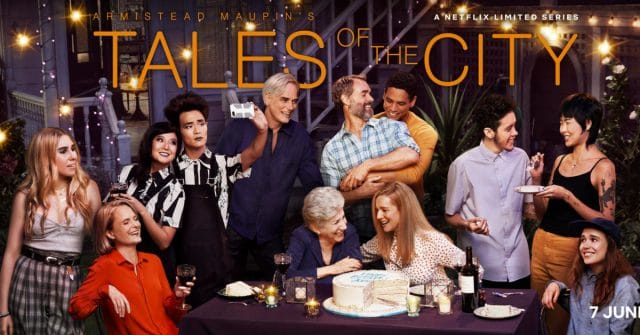 Netflix has released the trailer for its upcoming Tales of the City revival, and the trailer shows off an array of LGBT+ characters.

The revival comes 26-years after the original Tales of the City miniseries first aired on Channel 4 in the UK.

Netflix’s Tales of the City will follow a new chapter in the famous story, and is even set to bring some of the original cast back, including Olympia Dukakis as Anna Madrigal and Laura Linney as Mary Ann Singleton.

Netflix’s Tales of the City will follow Mary Ann as she returns to San Francisco and is reunited with her daughter Shawna (Ellen Page) and ex-husband Brian (Paul Gross). She returns 20 years after leaving them behind to focus on her career.

After fleeing a mid-life crisis in her picture-perfect Connecticut life, Mary Ann finds herself drawn back into Anna Madrigal’s world, who has a whole chosen family of young LGBT+ people living at 28 Barbary Lane.

Those queer characters feature prominently in the series’ trailer. At one point in the trailer, Mary Ann’s daughter Shawna tells another woman: “Whenever I look at my mom, all I see is I wasn’t enough to keep her here.”

– Shawna, played by Ellen Page, in the Tales of the City trailer

The woman replies: “It’s obvious to me that you’re the centre of this social universe,” before the pair share a kiss.

Also featured in the trailer is Dukakis as her iconic character, Anna Madrigal. At the beginning of the trailer, she speaks of 28 Barbary Lane, and says: “I moved here in 1966, and I suppose it was a different place then, but in some ways not at all.”

Vega, who made history when she became the first trans person to be a presenter at the Academy Awards, will play a trans woman called Ysela, who has a major role in Madrigal’s life.

The original 1993 Tales of the City miniseries broke new ground in representation of LGBT+ characters on-screen. It was produced by Channel 4 and screened in the UK in 1993 and was later shown on PBS in the United States the following year.

PBS faced backlash for airing the LGBT-oriented series and the network later backed out of producing a follow-up. Channel 4 instead teamed up with cable network Showtime to produce a sequel, called More Tales of the City.

The series are based on nine novels written by American author Armistead Maupin, which were published between 1978 and 2014.

Armistead Maupin’s Tales of the City will be released on Netflix on June 7.