Home Gay Life The Perfection stars reveal what drew them to the controversial Netflix horror... 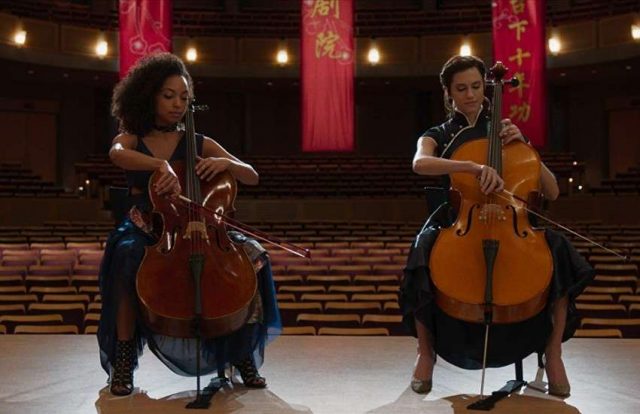 The Perfection is one of Netflix’s latest original movies — a female-led horror movie with numerous twists, turns, and shocking, bloody moments.

It’s receiving reviews that run the gambit. Some people have called it a , while others had of the movie. For others still it’s .

Lead stars Allison Williams and Logan Browning, however, were drawn exactly to the wild, unpredictable nature of the film.

Williams and Browning spoke to GSN about the film, and portraying female characters in a queer horror during the time of Me Too.

The film does not shy away from trauma, abuse, and other dark themes. In the Time’s Up era, when calling out sexual assault and prioritizing the safety of women in the industry has come to the forefront, both Williams and Browning agree that projects need to have honesty.

‘The best way to approach these themes in any movie is to be honest about the characters’ experiences and where those experiences come from,’ Browning said.

Williams agreed, telling GSN that playing any character requires getting to know them. In this case, the questions she asked of her character were much bigger and harder to answer.

‘It was important to all of us we were playing real characters who are three-dimensional and the movie didn’t paint them with a broad brush,’ she said.

Browning added: ‘I’m proud of this movie and its strong leads in the wake of the Time’s Up movement.’

As the film’s trailer hints, there’s a queer element to the film (and Netflix even categorizes it as an LGBTI film). Portraying LGBTI characters in a genre like horror, while maintaing respectful and authentic representation, can be a difficult line to walk.

‘We never had a conversation about labeling them,’ Williams said matter-of-factly. She played Charlotte as initially unsuspecting of her connection with Lizzie, but ultimately giving in to it.

For Browning, too, the more sexual scenes between the characters was about their connection — without any labels.

‘It’s about two women intensely drawn to one another and it developed immediately into something romantic and sexual,’ she explained.

‘We wanted to approach it in a way that felt true to the experience of meeting someone you’re immediately connected to. We didn’t want to label that.’

She added that by allowing the characters to simply exist, it was ‘an awesome, radical way’ to depict representation.

Browning and Williams in a scene from The Perfection | Photo: IMDB/Netflix

Both Williams and Browning said it was the characters who drew them into the project.

‘Even though she goes through severe trauma, it never lessens her strength or perseverance,’ Browning said of her character Lizzie.

They also both admired the way the movie never ventured into exploitation.

Browning continued, touching on outdated stereotypes of female characters in horror films, like the virgin and the slut: ‘These characters don’t adhere to the traditional stereotyping of women and exploitation of us.’

Williams added: ‘There were many opportunities for exploitation but it didn’t take that path.’

For a movie that depicts the ugly side of trying to attain perfection, Williams and Browning said they both had their own experiences with it, especially as women. It took time for them to learn to combat it.

‘I give myself the space to evolve and not reprimand myself when I make mistakes,’ Browning said of how she employs self-care and fighting society’s expectations of perfection.

Williams, meanwhile, advised not falling into the trap of comparing oneself to another.

‘You have to hold yourself to your own standards of what best looks like, not other people’s filters of perfection,’ she said.