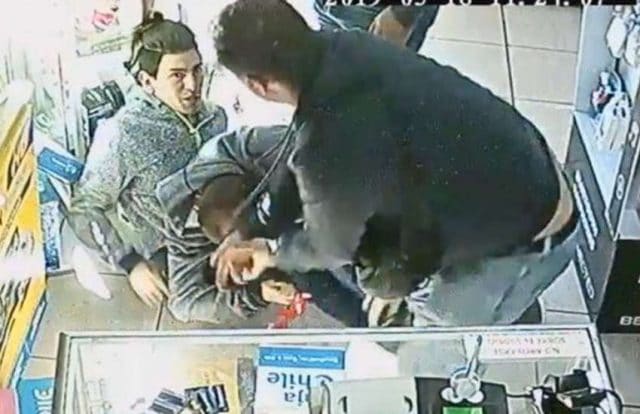 Three men brutally attacked a gay couple in Navidad, Chile on Saturday (18 May).

Acosta and Campos, who own an electronics store, told Movilh the men shouted ‘faggots’ and other homophobic insults.

Footage shows the three men grabbing, punching, kicking and pulling the hair of the two men.

One of the attackers became confrontational after demanding a replacement for a product he had bought from the shop.

According to Movilh, local police detained the three men. But, they later released them with only a fine.

President of Movilh, Gonzalo Velásquez, said the case showed that hate laws should be reformed.

He said it was important to include violence based on sexuality even if it was not the primary reason for the attack.

Four men beat and tortured Zamudio for several hours in a park in Santiago. He died three weeks later.

Chileans overwhelmingly support LGBTI rights in the South American country. But violence is still an issue there.

A recent survey showed 65% of Chileans above the age of 18, supported marriage equality. That’s a seven point jump since February.

On trans issues, 67% of people agreed a person should be able to transition without surgery or approval for a medical board. But only once they’ve changed their gender markers on official documents such as national ID cards and passports.

But LGBTI people regularly face discrimination and violence in Chile.

In January, at least two men in Chile were violently attacked and tortured in two seperate homophobic attacks.

One man had his head held under hot water in a hot tub. Attackers allegedly stomped on the other man’s genitals, burnt cigarettes on his hand and hit him on the head with a large stone.

Attackers allegedly forced José David Muñoz Vargas, 52, into the hot tub because of his sexuality.

Muñoz Vargas was rushed to a nearby hospital with severe burns.

A 24-year-old man was also attacked in a suspected hate crime on New Year’s Day in the coastal city of Valparaíso.

The man told Movilh he was travelling in a car with his attackers and at about 8pm the men became violent.

‘The men then began to insult him because of his sexual orientation, as well as to beat him and torture him.

The alleged attackers then drove the young man to Laguna Verde, a salt lake in the Andes Mountain. There they began to violently beat and torture him.

They stomped on his genitals, burnt cigarettes in his hands and beat him on the head with a rock. He fell unconscious and woke up the next day ‘disoriented and lost’.