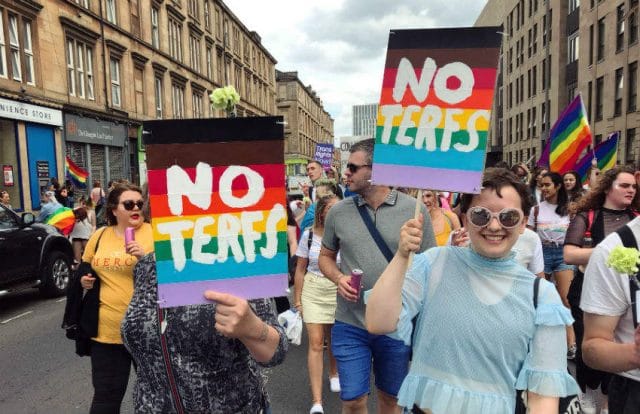 Parker posted an image of the new sticker she created on Facebook. It features a bright pink background and black font reading: ‘Trans women are men and most have a penis.’

Based on the caption, Parker will be making the stickers available for other people to obtain.

Trans activist Tara Hewitt shared a screencap of the Facebook post on Twitter, writing ‘this is what trans people have to put up with from anti trans extremists’.

She described TERFs as ‘obsessed with us and cruel nasty people’.

When reached for comment, Hewitt explained to GSN the stickers show how anti-trans people’s message of ‘wanting to debate and have an open discussion are simply dishonest’.

‘Their motives are clear to the real vicitms of their hate campaign,’ she added.

‘Stickers like this contribute to the climate of fear being created,’ Hewitt continued. ‘We need more than ever as a LGBT community to come together with love & hope to support each other and help banish views displayed by anti trans campaigners to the dustbin of history where they belong.’

Recent reports in the UK revealed an .

Hewitt said there are three main things allies can do to help transgender people in the face of hate.

‘Firstly, speak to a friend or colleague sharing real facts to raise awareness about the climate of fear and myths created by anti-trans campaigners,’ she advised.

‘Secondly, uplift trans voices, particularly trans people from other marginalised communties such as Muslim, Jewish, Black and disabled voices. Help give them a platform to be heard as so often trans voices are absent.

‘Finally, help create a climate of solidarity and hope, letting trans people know you are an ally and care about being a supportive friend or colleague when the impact of anti-trans campaigners leave us needing support.’

Last year, Parker revealed she and others were  trans women Munroe Bergdorf and Caitlyn Jenner during a segment on Channel 4.

In January, she posted a video of herself storming into a meeting on Capitol Hill in the US and , a transgender Human Rights Campaign employee.