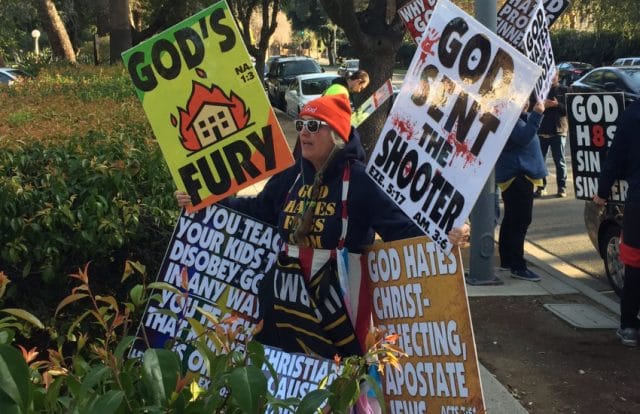 The Westboro Baptist Church protested outside of the US’ only all-male historically black college over the school’s new admission policy that accepts trans men.

The gates of Morehouse College, Atlanta, Georgia were chockablock with Westboro demonstrators yesterday morning (19 May).

WXIA-TV reported that the protesters from the Kansas-based church were rallying against the college’s new admission policy that will allow trans men to enrol from 2020.

Their board of trustees announced that trans men will now be allowed to enrol into the college, which historically is all-male and primarily black.

Moreover, the board developed the policy change over 15 months, with input from faculty, staff, students, as well as alumni.

But the notorious church organization – listed by the Anti-Defamation League as a hate group – taking a stance against the change.

Ahead of graduation ceremonies, the group said that they were directing their ire towards one of the event’s speakers, Dr. Ken Walden.

However, in a blistering personal attack, a release from the church said, among other things, that he has made a career ‘lying about Jesus Christ and His Word.’

Gay Star News reached out to Morehouse College for comment.

The Westboro Baptist Church has a long history of protesting funerals of gay people and victims of national tragedies.

According to their website, godhatesfags.com, they have protested in 63,534 times in 1,033 cities across the United States.

Furthermore, the Church was founded in 1955 by Fred Phelps, who died in 2014. The Southern Poverty Law Center describes the group as ‘arguably the most obnoxious and rabid hate group in America.’