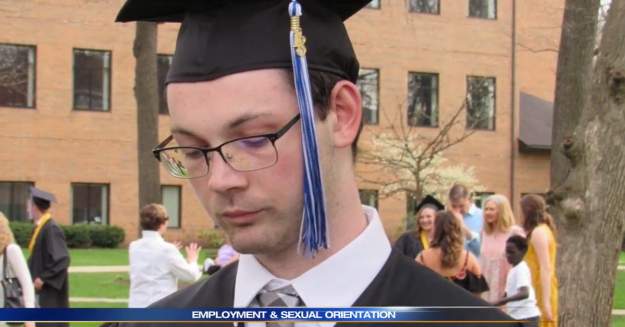 A music studies graduate is standing up for his right to be openly gay.

Kyle Walterhouse is a recent graduate of Bethel College. He attended the Christian based school because of its respected music department.

“I decided to go to Bethel because of the programs that they have. I knew that their music department and their education department are both strong,” said Walterhouse to WSBT22.

Unfortunately, Walterhouse had to make some compromises in order to go to the school. Not only is Bethel College a Christian school, but it is an incredibly strict one.

The school has a covenant that includes a rule that no one can engage in homosexual behavior. This was, of course, a problem for Walterhouse who was gay. That said, he singed the covenant anyway.

“I was like OK, I can make it through the four years,” said Walterhouse.

But after graduating, Walterhouse decided to stay on and work through the summer as cleaning staff.

Problem is that Walterhouse decided to change his Facebook status to show that he was dating a man. When his boss caught wind of this, he was told to take the Facebook status down or lose his summer job.

While Walterhouse was sad to see his job go, he decided to take a stand against the school and his boss.

In addition, WSBT 22 reached out to Bethel College for comment. In response, they received a link to the school’s employment policies, which state that employees must agree to the school’s covenant of lifestyle which includes that marriage is between one man and one woman.