Home Gay Life A gay couple are suing Venezuela in order to have their marriage... 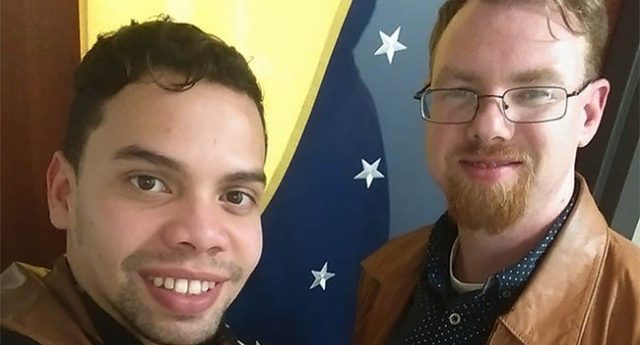 A gay couple are suing Venezuela for $10 million in order to have their marriage recognised by the state. Since the wedding, the two have been in a year long court battle with the Bolivian Republic of Venezuela over issues with having their marriage recognised.

“It’s causing a lot of issues. But it’s also the fact that his government in his country is refusing to recognize us as a married couple, which is painful,” Patrick told GSN.

“We love each other, and we have a life together and it’s tough.”

If the couple are successful with the lawsuit then they will be the first same-sex marriage to be recognised in the country – potentially setting legal precedent for the future of LGBT rights.

The couple started the process of getting their marriage recognised at the Venezuelan Consulate in Boston, but were turned away when they were told they did not have the right paperwork.

After obtaining another marriage license, they took the papers to the Consulate once again.

When there they were left waiting for an extended period of time, before reportedly being pulled into Consul Omar Fernando Sierra’s office and given a speech on equal rights in Venezuela.

“He took our application and put it together himself as a formal petition to the government in V to allow him to register our marriage,” Patrick explained.

Despite Consul Sierra’s promise, the two faced a period where they heard nothing about their case.

The two decided they had no other choice but to sue when Carlos began to run into issues with his US documents not matching his Venezuelan passport.

The lack of recognition also means that Patrick cannot get permission to visit the country and meet his husbands extended family and friends.

They put the lawsuit in for $10 million in the hopes that it would get the government’s attention.

Patrick said: “We know that even if we get a judgement of $10 million, we’ll never be able to collect. It’s more the principle of the thing.

“We’ve been doing this to hopefully get a response out of the government, and they keep stalling. It’s getting difficult.”

The pair went through the lengthy process of putting the lawsuit and summons together themselves – and even ensured that it would go correctly through the system.

They found that the lawsuit had been correctly filed, but the government have ignored them.

Now, the couple face a waiting game with very few moves to play.
They could file a default judgement order which would mean the couple received the payout – but US and Venezuela relations makes this move not so attractive.

“We’ll see the diplomatic cooperation between the two countries as it is now, which isn’t great – it’s only going to get worse,” Patrick said. “Which is going to make the situation for us trying to get this done even worse.”