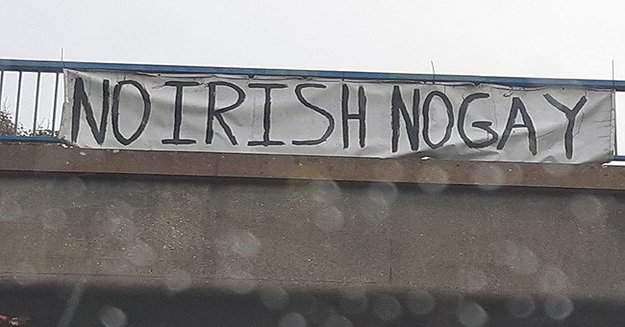 I’m saddened but not surprised. This hateful banner was found hanging over an overpass on an expressway in Northern Ireland, according to Attitude. How annoying that people are still like this.

Both the Irish and LGBTQ people have historically been subjected to unfair persecution. Seriously, go read “A Modest Proposal” by Jonathan Swift and… pretty much anything I’ve written on here. It’s mostly negative. The banner was discovered on October 19th by Amanda Ferguson. She posted a picture of the banner on Twitter with the caption “Oh dear. Hate mongers at their work again. This anti-Irish, homophobic banner has appeared on the M1 between junction 10 (Oxford Island) and junction 9 (International Airport). I can’t see this taking off tbh. Just not as catchy as: No woman, no cry!”

The banner has since been taken down and Declan Kearney, a Sinn Féin (a left-wing political party in Ireland) called the banner “reprehensible” and said that this hate message is not indicative of the views of the majority of Irish people, as Ireland has recently thrown one of “the most vibrant, most colourful Pride parades” which sent an LGBTQ-affirming message to the people of Ireland.

As a gay man and an Irish (well, partially at least) person, this banner really bothered me. What I don’t understand is how being Irish and/or gay has any impact on anyone. It doesn’t make sense to me.