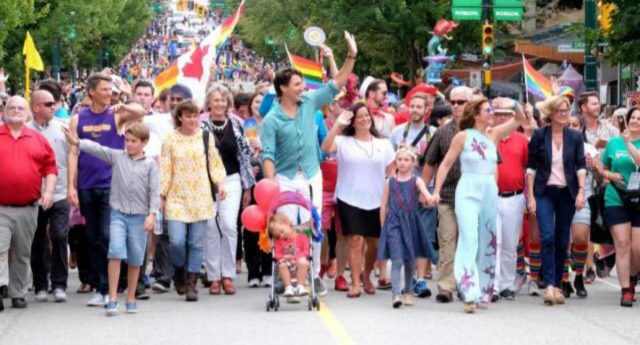 It’s been a colourful couple of months for the liberal leader, after he also became the first premier to lead Toronto’s parade a few weeks ago.

Trudeau and his family received a massively warm welcome from the gathered crowd, as he stopped to pose for selfies as supporters chanted his name.

However, the PM downplayed his appearance, noting he’d been attending Pride parades for years.

He tweeted earlier this year that he looked forward to being there again, “this time as PM.”

Trudeau has attended Pride parades in Toronto and Vancouver for years – but never as leader of the country.

Trudeau has shown himself as a keen supporter of equal rights since being sworn into office.

In November, the government promised to take in a substantial amount of gay refugees from war-torn Syria.

Amid security concerns, the country does not plan to accept unaccompanied males – but it will make an exception for gay people, who face persecution in Syria from both the government and the terrorist group known as Islamic State.

The pledge to accept refugees was a cornerstone of the commitments by new PM Trudeau. The keen LGBT ally also demonstrated his commitment to equality by naming a diverse, gender-balanced cabinet.

Trudeau earlier this year announced that he intends to posthumously pardon a man who was jailed simply for being gay in the 1960s.