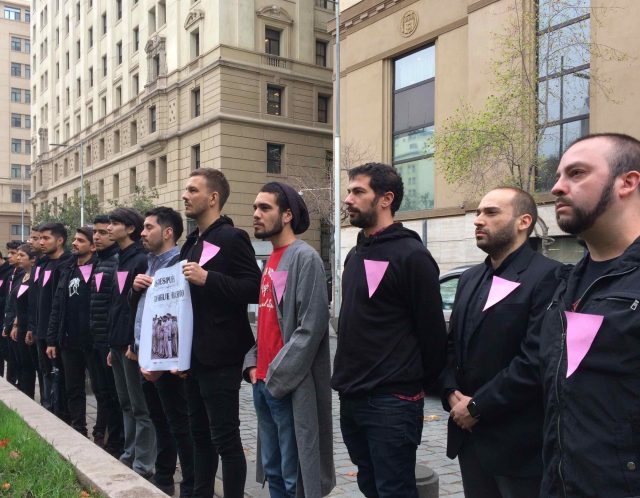 (This story first appeared in The Santiago Times, in which Darius Zheng is also a freelance correspondent of. Permission has been obtained to share this story via Gay Star News.)

Protesters turned up this morning outside Chile’s Foreign Affairs Ministry (Ministerio de Relaciones Exteriores) in the capital, Santiago, to protest against the setting up of ‘gay concentration camps’ in Chechnya.

Using pink triangles to symbolize how the Nazis used to identify gay men during World War II, the demonstrators urged Chile’s Minister of Foreign Affairs Heraldo Muñoz to speak up against the reported mistreatment received by Chechen gay men.

It’s the first time since World War II and Hitler’s Third Reich that homosexual men have been rounded up and kept in camps. 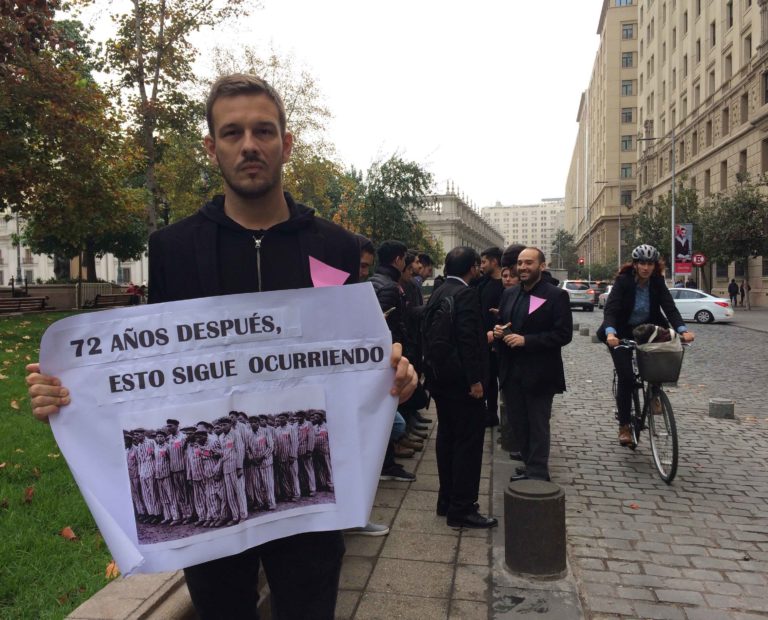 Originally slated to happen yesterday evening but postponed due to wet weather reasons, the protest in Santiago happened around 10am local time and lasted for about an hour. Protesters wore black shirts with pink triangles pasted in front, a collective symbol that the organizer had hoped to replicate how Nazis identified gay male prisoners sent to the concentration camps during World War II.

The protest comes at a time when Muñoz was slated to give his annual address that very morning in the building itself.

Luis Larrain, the 36-year-old organizer of the protest, who also recently stepped down as the president of Iguales, Chile’s largest human rights organization fighting for the rights of LGBTQs, said:

‘He (Muñoz) should say something, but in three weeks he hasn’t said a word.’

‘I think that’s very problematic because our government has supposedly even led resolutions to punish violence and discrimination based on sexual orientation and gender identity, and also the Council of Human Rights in Geneva, so why did the government lead such a resolution in 2014 and 2016, and then in 2017 says nothing in three weeks about these gay concentration camps where they torture and kill gays just because of the fact that they are gay?’ 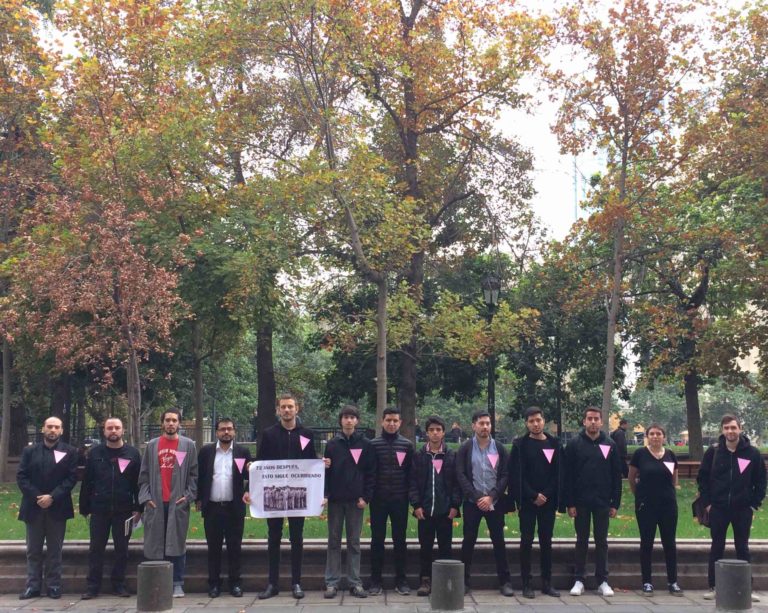 ‘We want Minister Muñoz to say something, to publicly condemn the situation of the gay concentration camps in Chechnya,’ added Larrain, who is currently also aiming for political office in the Chamber of Deputies under the country’s National Congress.

Russian newspaper Novaya Gazeta reported earlier this month that police in the predominantly Muslim republic of Chechnya have rounded up more than 100 men suspected of homosexuality and thrown them into what is described as ‘modern day concentration camps’ by human rights groups. 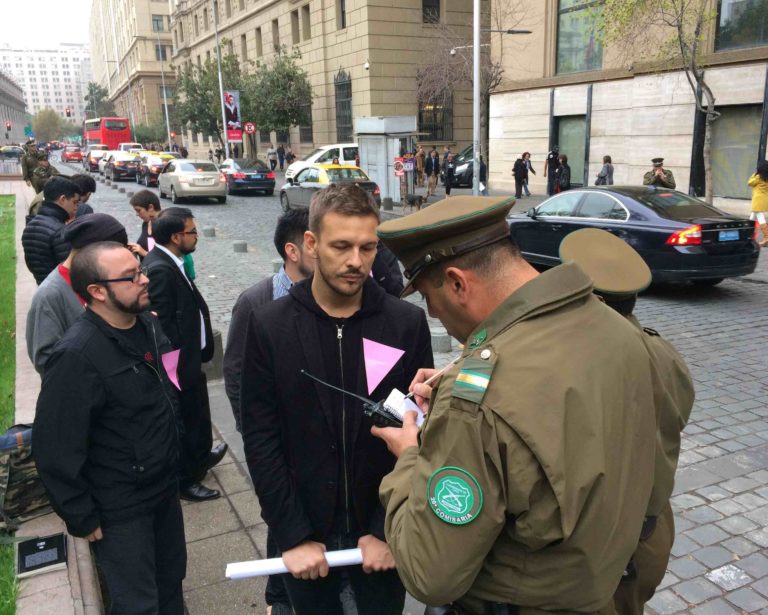 Novaya Gazeta has also reported that at least three of the detainees have been killed.

While authorities in Chechnya have denied the reports, with the spokesman for leader Ramzan Kadyrov insisting that there were no gay people in Chechnya, Novaya Gazeta’s report has sparked global outrage, with hundreds protesting outside London’s Russian embassy.

An online petition asking for a full investigation into the matter so as to ‘uphold the values of justice and tolerance’ has also been signed by more than 1.3 million people.

On the other hand, human rights groups such as the Russian LGBT Network together with global organizations such as All Out have launched donation drives to raise funds to evacuate those who are affected.

Global leaders such as US Ambassador to the United Nations Nikki Haley and UK Foreign Office minister Baroness Anelay have also expressed concerns of the happenings in Chechnya.

Chile has yet not made an official stand on this matter.

With the change of the venue and time, Larrain admitted that it may have affected the number of people attending the protest.

‘Yesterday was after office (hours), and now it is in the middle of the working day, so obviously it is very hard for workers and students to come, but Minister Muñoz’s address is today, so it was a good occasion I think.’ 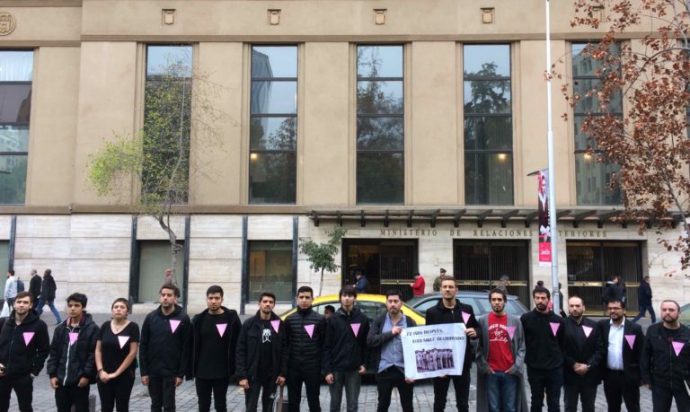 However, Larrain also claimed that the change may not necessarily be all bad.

‘I think there is more political and communication impact here because we are at the civic center. We are in front of the government towers and here is where all the decisions are made, and where all the cameras and journalists are, whereas the Russian embassy would be more of a symbolic thing. Because it (the embassy) is uptown and in the middle of nowhere, there probably wouldn’t be any journalists,’ said Larrain.

Still, some protesters, like 43-year-old writer Rodrigo Muñoz Opazo, were not deterred by the change of venue and time. ‘It (LGBT issues) is a subject I have always written (about) – the discrimination and torture during the 1990s, the last decade and the present decade, in Chile and in Latin America. And if this is happening in the world, for me it’s terrible. I think the Chilean government and people have to show that it is against this kind of discrimination and torture in the world.’

Opazo added: ‘I hope my participation and the group that is together right now will show the world, especially the Latin American world, a different point of view. And I hope Argentina, Uruguay, Brazil, Peru – they have to do the same thing, just like Mexico and Spain which have already done activities.

‘Some people say that it (the concentration camps) is not true, that they are creating this and making up stories, I don’t think so. I have seen the pictures, the news, and everyone is talking in United States and England about this.