She was told it could set a precedent of neighbors flying other “offensive” flags, like the Confederate flag.

A community has rallied in support of a Florida woman who was ordered to stop flying her rainbow pride flag.

Jenifer Raymond, who lives in Rockledge, said her landlord received an email from a member of the neighborhood’s architectural review committee, saying only American, state, or military flags may be flown, and ordering her to remove the pride flag she had flown for two years. 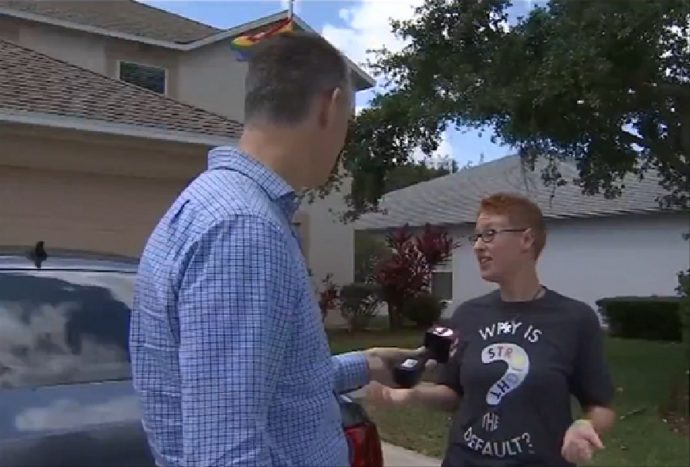 When confronted with the fact that the community bylaws do not mention flags, the member cited part of the “ground maintenance section,” saying the flag could be deemed “offensive,” and suggested it could set a precedent for other offensive flags to be flown, like the Confederate flag, reports WFTV.

“The Confederacy supported slavery,” Raymond said. “(The rainbow flag is) a symbol of equality and acceptance of all.”

“It’s a symbol of acceptance, tolerance and equality,” she added. “They’re saying it’s offensive. To me, that’s like saying I’m offensive because I exist.”

Her landlord told her to keep flying the flag, which she did.

Then, late last week, the president and vice president of the homeowner’s association went to Raymond’s house to apologize for the situation and inform her that she can fly the flag as long as she wishes.

Pride flags have since popped up in front of other homes on her street in solidarity.

On Sunday, the homeowner’s association planned a rally to show support and reinforce the message that it was wrong to tell Raymond to take her flag down. More than two dozen people arrived in front of her house, holding rainbow flags and handmade signs with messages of pride and support.

ONLY On @WFTV Community shows up to support and rally with renter erroneously told to take down rainbow flag in front of home. Pic credit: Jenifer Raymond #WFTV pic.twitter.com/QQCQQlxzT1

On @WFTV HOA at the Rockledge area subdivision organized rally, reiterated there is no rule regarding this flag. Person who sent letter, not on board, acted on own #WFTV pic.twitter.com/DoZn1YhGOk

Raymond said she didn’t anticipate the level of attention her story would get, saying, “It immediately went viral and blew up. I couldn’t keep up with how fast things were happening, really.”