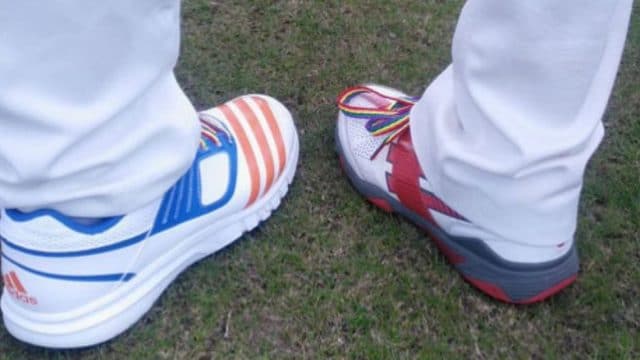 The England and Wales Cricket Board is backing Stonewall’s Rainbow Laces campaign.

The England and Wales Cricket Board has joined up to Stonewall’s famous Rainbow Laces campaign, in partnership with Sky Sports.

Matches over the coming weekend (10-13 August) in both the Natwest T20 Blast and the Kia Super League will see cricket grounds across the country getting a rainbow makeover.

Rainbow flags will be used in the guard of honour at every match and they will be using specially designed rainbow stumps. Umpires and commentators on Sky Sports will be sporting rainbows and rainbow flags are expected to fly at multiple grounds.

This will be the biggest show of LGBT+ support that the sport has ever hosted. Stonewall’s Rainbow Laces campaign is “about welcoming and accepting LGBT people at all levels of sport.”

We’re delighted to be working with @ECB_Cricket to bring #RainbowLaces to the @NatWestT20Blast this week. Watch out for the #RainbowStumps! pic.twitter.com/t0HtsWdBfK

While cricket is a relatively welcoming sport, research by Stonewall has found that one in six fans have heard anti-LGBT+ remarks at games (compared to half of all sports fans in the past five years).

Head of Campaigns at Stonewall, Robbie De Santos, said: “It’s great that cricket has joined our campaign and is giving so much support and visibility to LGBT equality in sport this weekend. We know from our research that across all sports there are LGBT people who don’t feel welcome or able to be themselves.”

Tom Harrison, ECB’s Chief Executive Officer, added: “Our thanks to Stonewall for inviting ECB to support the campaign and spread the message that cricket is a game for everyone. We’re proud to be a part of it and we will be encouraging as many fans, players and officials as possible to show their support for the initiative by sporting Rainbow Laces this weekend.”

Chris Sherwood, Press and Publicity Officer at Graces Cricket, the world’s first LGBT cricket club, also said: “This is such an important first step being taken by the ECB and Sky Sports towards culture change in cricket… we welcome this campaign, as we welcome people, with open arms.”

In 2011, Steven Davies, who plays for Somerset, became the first international cricket player to come out as gay. He received widespread support from his teammates and the wider sporting community.

Follow the coverage online over the weekend with the hashtag #RainbowStumps.