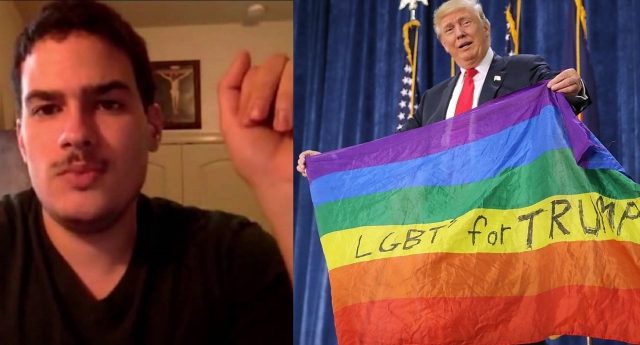 A former Donald Trump supporter is not happy with the nominee for waving a rainbow flag.

The Republican Presidential nominee briefly waved an upside-down ‘LGBT for Trump’ Pride flag at a rally today in Colorado.
Though Trump did not speak about the flag-waving or affirm any support for LGBT rights, his comments have upset former Trump supporter and militant Christian activist Theodore Shoebat.

Mr Shoebat fumed about Trump “bowing down to the sodomite agenda” in a clip snipped by RightWingWatch.

He fumed: “In an ideal society, anyone who supports homosexuality would be put to death.

“Bastards like [gay Republican] Peter Thiel over here would be hung or burned at the stake, and rightfully so.

In recent weeks, Trump has come under fire over his shifting stances on LGBT rights.

In a bid to attract support from evangelicals, Trump confirmed he would “consider” appointing ultra-conservative Supreme Court justices to repeal equal marriage, come out in favour of North Carolina’s anti-trans law, and confirmed he would sign a Republican-backed bill to directly permit religious homophobic discrimination – while his running mate Mike Pence has confirmed he would dismantle Barack Obama’s protections for LGBT people.

Last month Trump confirmed he would sign the so-called First Amendment Defence Act, which bans the government from taking any “action against a person, wholly or partially on the basis that such person believes or acts in accordance with a religious belief or moral conviction that marriage is or should be recognised as the union of one man and one woman, or that sexual relations are properly reserved to such a marriage.”

The broadly written law would effectively legalise all discrimination against LGBT people in all sectors – from employment to retail to healthcare – as long as the person discriminating claims it was due to their religion.

In an interview earlier this month, Pence confirmed that the Republicans would roll back Obama’s orders so that “the transgender bathroom issue can be resolved with common sense at the local level”.

He said: “This is such an example of an administration that seems to have… there’s no area of our lives too small for them to want to regulate, no aspect of our constitution too large for them to ignore.

“Donald Trump and I both believe these questions can be resolved with common sense at the local level.

“These issues are resolved in the state of Indiana whenever they come up, and they should be resolved, for the safety and wellbeing of our children first and foremost, their privacy and rights, and with common sense. Donald Trump and I simply believe all of these issues are best resolved at the state level, by communities.”

He added: “Washington has no business intruding on the operation of our local schools. It’s just one more example of the heavy hand of this administration, and Donald Trump and I will stand by that common-sense people that when it comes to our kids, and the operation of our schools, those decisions should be made at the local level.

“Washington DC has no business imposing its bill and its values on communities around the nation.”

Speaking about anti-discrimination laws, Pence said: “No-one should fear persecution because of their deeply-held religious beliefs.

“I’m a Christian, a conservative and a Republican, in that order. The Trump-Pence administration will be dedicated to preserving the liberties of our people, including the freedom of religion that’s enshrined in our Bill of Rights.”

Pence has one of the worst records on LGBT rights of any candidate on a major party’s Presidential ticket in recent times.
A hardline evangelical, the Governor of Indiana stirred up international outrage last year when he signed Indiana’s controversial ‘Religious Freedom Restoration Act’, which gave businesses the right to discriminate against gay people on the grounds of religion.

Governor Pence previously suggested that HIV prevention funding be drained in order to fund state-sponsored ‘gay cure’ therapy, and earlier this year appeared unable to answer when asked whether it should be legal to fire people because of their sexuality.
An investigation last month found that Pence approved extreme anti-LGBT articles when he was the head of the Indiana Policy Review journal in the 1990s.

In an item published under his editorial tenure in the December 1993 issue, Pence’s journal criticised The Wall Street Journal for taking part in a job fair for gay journalists – suggesting that “gaydom” was a “pathological condition”, and arguing that gay journalists would be biased in their coverage because of their sexuality.

It claimed: “The more extreme of the gay movement consider themselves members of a sexual determined political party.”
Another edition published in 1993 attacked Bill Clinton for reforms to permit closeted gay people to serve in the army.
It claimed: “Homosexuals are not as a group able bodied. They are known to carry extremely high rates of disease brought on because of the nature of their sexual practices and the promiscuity which is a hallmark of their lifestyle.” 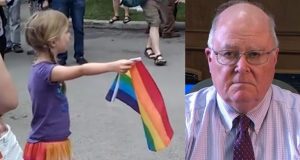 Nick Gayer
1
The Catholic League have accused Microsoft of ‘exploiting’ Christmas to promote equality. Earlier this month, the technology giant released a festive advert that showcased a...