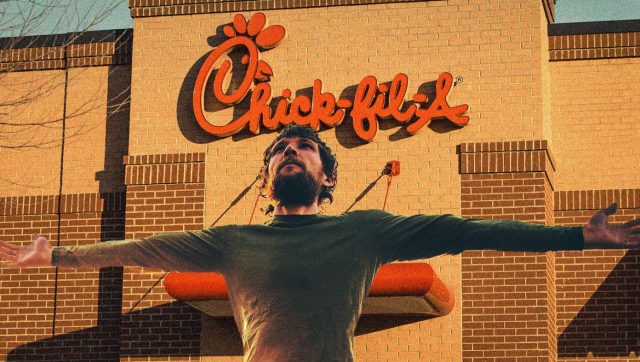 DALLAS, TX—While gay conversion therapy has long been thought to be ineffective, there may be a promising new method for converting the gays.

Local gay man Landon Ellison was out protesting a Chick-fil-A in his city Wednesday morning when he got hungry. He looked around to make sure his fellow protestors weren’t watching before slipping into the restaurant and ordering a classic chicken sandwich.

“It’s probably terrible,” he sneered at the cashier, who only smiled and said it was her pleasure to have her place of work insulted. “I’ll bet it tastes like HATE!”

But when Ellison’s food was served 3 seconds later, something miraculous happened: he took a bite of the sandwich and suddenly found he was no longer attracted to men. The woman who served him the sandwich instantly appeared attractive to him. “How you doin’?” he said, raising his eyebrows suggestively. She told him it was her pleasure to be hit on and walked away.

Ellison emerged from the restaurant in a daze, fell to his knees, and lifted his hands and eyes up to the heavens in praise and thanksgiving for the amazing transformation that had occurred in his life.

Sadly, he was turned back by a Whopper.