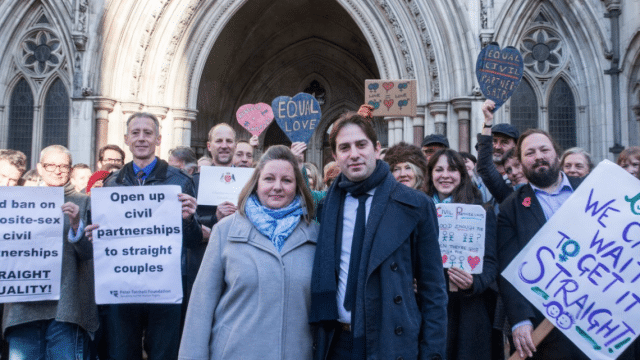 The Court of Appeal has ruled against a couple fighting for straight civil partnerships.

A couple from London, Rebecca Steinfeld and Charles Keidan, have been in a legal battle for three years to be granted a civil partnership as an alternative to marriage, which they believe has “sexist” and “patriarchal” connotations.

The couple first applied for a civil partnership notice in 2014, before being rejected.

When same-sex marriage was introduced in England and Wales in 2014, the government decided to keep existing civil partnership legislation in place, but it was not extended to include mixed-sex couples.

In the Court of Appeal today (February 21), Steinfeld and Keidan lost their battle to have access to a civil partnership by a majority of two to one, in a ruling which has been welcomed by the government.

The three judges who heard the case said there was a potential breach of Steinfeld and Keidan’s human rights, but that the government should have more time to decide on the future of civil partnerships legislation in the UK.

The couple intend to take the case to the Supreme Court, saying there is still “everything to fight for”.

After today's court ruling, do you think civil partnerships should be open to opposite-sex couples?

Human rights campaigner Peter Tatchell told Talk Radio‘s Julia Hartley-Brewer: “If we’re going to have civil partnerships, they should be available to everyone. It’s a fundamental principle that in a democratic society we should all be equal before the law.”