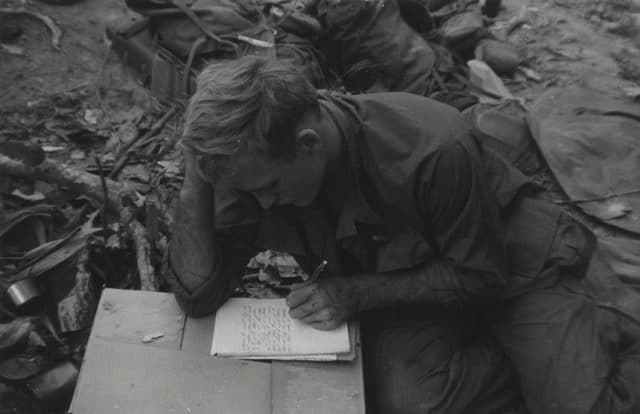 Two young men dared to confess their love during a time when homosexuality was illegal.

While stationed as an anti-aircraft bomber, Gilbert Bradley exchanged heartfelt letters with his lover, Gordon Bowsher.

During this time, men in the armed forces who were caught having gay sex could be shot.

The letters remained a secret until Bradley’s death in 2008, when a house clearance company found the letters and sold them to a dealer.

Mark Hignett from the Oswestry Town Museum bought the letters for their connection to the local area.

He spent thousands of pounds on the collection of letters and discovered the truth.

Each letter was signed with ‘G’ and experts assumed it was the initial of a girlfriend.

But upon reading the contents of the letters, it became clear ‘G’ stood for Gordon Bowsher.

One letter reads: ‘My own darling boy,’ reports the BBC.

‘There is nothing more than I desire in life but to have you with me constantly.

‘I can see or I imagine I can see, what your mother and father’s reaction would be.

‘[T]he rest of the world have no conception of what our love is – they do not know that it is love,’ the letter read.

Another reads: ‘For years I had it drummed into me that no love could last for life.

‘Imagine the time when the war is over and we are living together.

‘[W]ould it not be better to live on from now on the memory of our life together when it was at its most golden pitch,’ the letter reads.

Roscoe said: ‘There is a gay history and it isn’t always negative and tearful.

‘But despite all the awful circumstances, gay men and lesbians managed to rise above it all and have fascinating and good lives despite everything,’ he said.

One letter beautifully reads: ‘Wouldn’t it be wonderful if all our letters could be published in the future in a more enlightened time.

‘Then all the world could see how in love we are.’

Unfortunately, it is believed the couple were not reunited after the war and moved on to live separate lives.