Chris Sevier previously sued for the right to marry his laptop.

A federal judge has thrown out a lawsuit filed last summer against four members of Congress who display rainbow flags outside their offices in Washington, D.C., the Press-Telegram reports.

Chris Sevier’s 38-page complaint argued that homosexuality is a religion and that officials who displayed Pride flags were thus violating the constitutional prohibition on government establishment of religion.

In his suit, which sought $1 million in damages, Sevier described homosexuality as a “sect/denomination of the ‘sex-based self-asserted’ religion of ‘western postmodern expressive individualism moral relativism.’”

In addition to demanding the rainbow flags be removed, Sevier also asked the court to overturn the Supreme Court’s 2015 ruling on marriage equality and remove the flag-displaying representatives from office. 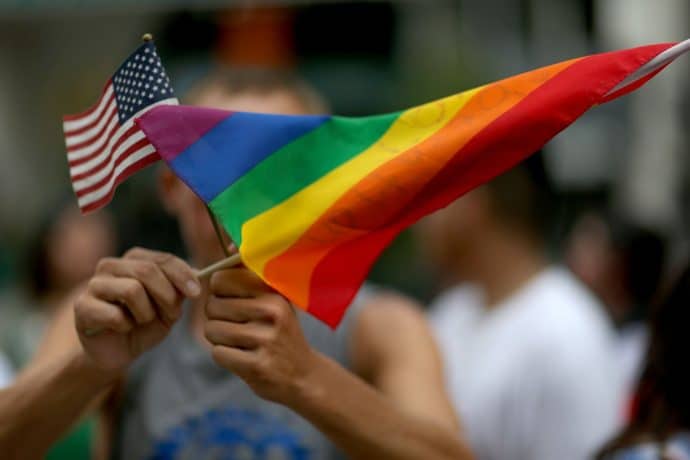 Judge Randolph D. Moss of the U.S. District Court for the District of Columbia rejected Sevier’s argument. “The gay rights movement bears no trappings of ‘religion’ as that concept is widely understood, and Sevier has not plausibly alleged that a reasonable person would perceive the display of the rainbow flags as religious in nature,” Moss wrote in his opinion. “Common sense… forecloses Sevier’s claim.”

“I will continue to proudly fly the Pride Flag outside my office as a symbol of love, peace, equality, and humanity to every visitor to Capitol Hill,” writes Rep. Alan Lowenthal of California in a statement. “I will never give in to intolerance, even when cloaked in the guise of legality.”

“It’s clear this misguided lawsuit was completely without merit and the court has said as much with this dismissal,” adds California Rep. Susan Davis. “These lawsuits attacking equality only strengthen my resolve to fight to fulfill our nation’s principles of liberty, freedom and equality.”

Sevier, a Nashville-based Christian country music producer, previously made headlines when he sought to undermine marriage equality by unsuccessfully suing several states for the right to marry his laptop computer.

Sevier co-authored a bill, introduced in South Carolina state legislature, defining marriage as a union between “a man and a woman” and calling other unions “parody marriages.”

He also sued Apple, demanding the company sell its products in safe mode to limit access to pornography.